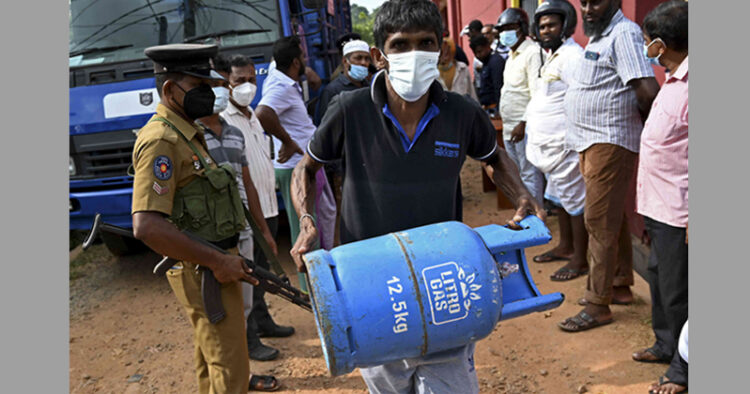 Protesters are hoisting and hurling loafs of bread to highlight rising food prices.

An unprecedented economic crisis is unfolding in Sri Lanka. Only few months ago the country banned all chemical fertilisers import, leading to a nation=wide farmers agitation, resulting in skyrocketing of rice prices. And while the country’s problems have been brewing for years, spillovers from the crisis in Ukraine have sent the island nation over the edge.

The Sri Lankan rupee has plunged to a record low against the US dollar. Annual inflation is in double digits. Import controls are in place. But, the country is teetering on the edge of a default.

Power blackouts ae a routine. Fuel, food and medicine – most of which are imported– are scarce, and rising prices are putting what remains out of reach for many Sri Lankans. Even printing paper is hard to come by forcing schools to cancel exams. The problems have sparked the biggest ever protests on the streets, which the troops, sent to quell.

Lanka is now turning to foreign assistance for help, including its two biggest trading partners, The Peoples Republic of China and India, for financial assistance. China is considering offering US $ 2.5 billion more over the US $2.8 billion already offered d and India has already extended US $ 2.4 billion. And President Gotabaya Rajapaksa’s government is currently in negotiations with the International Monetary Fund and the World Bank for a bigger aid package – something he had previously resisted, to avoid the often stringent stipulations the IMF puts across.

It is against the background of the above scenario that one needs to analyse and understand what led to the current crisis. The economic, financial, and political stability of one of Asia’s biggest democracies, is at stake.

Sri Lanka, which gained its independence from Britain in 1948, only recently emerged from a deadly and very costly 26 years old civil war. The war was fought between the government military of this majority Sinhalese country and armed separatists from the Tamil-speaking minority. Civilians and civil properties were frequent targets..

Toward the end of the war, in 2006, the government tried to jumpstart the economy  by borrowing heavily and attracting foreign capital by propping up the Sri Lankan rupee. In the short term, the strategy worked. The economy boomed, causing the per-capita gross domestic product to surge from US $1,436 in 2006 to US $3,819 in 2014 vaulting Sri Lanka past Ukraine, the Philippines and Indonesia.

Fuel has been hard to come by in Sri Lanka lately.

This lifted 16 lakh Sri Lankans out of poverty, 8.5% of the population, to be precise – and gave rise to a large middle class. By 2019, Sri Lanka ascended to the ranks of the World Bank’s “upper middle-income” countries.The designation lasted only for a year,  however, because all that growth came at a cost. Sri Lanka’s external debt tripled from 2006 to 2012, pushing the total public debt to 119% of the country’s GDP.

Those policies were suspended for a time in 2015, which stabilised the economy at a lower rate of growth, but the debt continued to accumulate..

The Covid Pandemic and War:

Then the Covid-19 pandemic hit the beleaguered nation.

This dealt a massive blow to the economy, especially considering a large tax cut the previous year which depleted the government coffers. Simply paying interest on that large debt took up 72% f the government revenue in 2020, requiring the central bank to print more paper cash to avoid default, thus fueling inflation.

Fortunately for the government and its citizens, Sri Lankans overseas continued to send home a vital lifeline of remittances, or about $7 billion a year.

But in 2021, as many economists and analysts urged Sri Lanka to seek international aid, the central bank instead focused on borrowing its neighbours, especially China and India, maintaining the value of the Sri Lankan Rupee and restricting imports.

The export controls caused shortages of essential goods like cooking gas and milk, and defending the currency drained Sri Lanka’s foreign reserves. Moreover, remittances from overseas began to trickle down, as the black market value of the Lankan rupee fell, leading people to avoid converting US dollars to Sri Lankan rupees at the official rate or by official channels. Annual inflation has been estimated at as much as 55%, though the  official rate of is declared as just 14%.

By March, this year,  reverberations from the war in Ukraine, which drove up international oil prices, of oil, wheat and many other consumable commodities, finally forced the hands of the government to change course. Beyond the effect on the cost of imported goods, the war also further threatens Sri Lanka’s tourism industry as flights to Moscow are now suspended. Before the war, the Russians made up the biggest chunk of Sri Lankan tourists, with Ukrainians not far behind.

Sri Lankan authorities had few options other than to allow the Lankan rupee to depreciate – which is expected to save billions of dollars a year and seek International Monetary Fund assistance. Sri Lanka will most likely also have to restructure its huge external debt load its large debt load by asking foreign bondholders to accept less than 100% of the value of their investments to make it more sustainable.

The strategy may work, only at a huge cost to the Sri Lankans, over a long period of time. The Sri Lankans might get very restive and rebel and, might, even lead to a kind of civil war.

Over 350 “non-essential” items are now barred from import, including milk, oranges and household appliances.

And the limited supply of goods that remain are getting more expensive by each passing day. The price of cooking gas, for example, is almost 300% higher than what it was only five months ago. On Saturday 2nd April, Government of India sent a consignment f 40,000 metric tons of diesel through the Indian Oil Corporation. The GOI has also extended a US $ 500 million credit line for fuel import.

Securing loans from the International Monetary Fund and the World Bank, along with short-term credit from China and India, may stabilise Sri Lanka’s economic and financial situation. But with protests growing and the austerity measures demanded by the lenders likely to prove unpopular, the government may find it hard to survive for long.