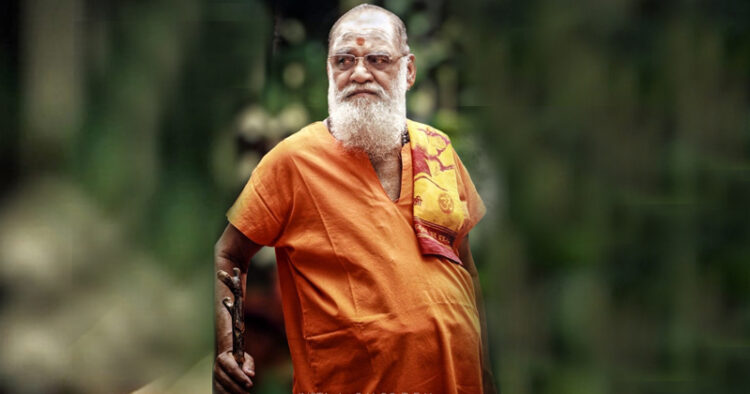 The knowing Self is not born; It does not die. It has not sprung from anything; nothing has sprung from It. Birthless, eternal, everlasting, and ancient, It is not killed when the body is killed. (1.2.18) — Excerpts from Kathopanishad

For those who are reading this probably have had some connection with my father, likely through his martial arts training, spiritual or healing practices. So it would not be surprising, if I address him as “Master”. It has no other connotations other than someone who excelled in all three practices mentioned above.

Master was a Hanuman devotee all his life. He embodied the strength and purity exemplified by Lord Hanuman. His willpower and morale was infectious. Master’s inquisitive mind, conviction and grit against all odds was exemplary and this marked his distinguished life.

Master was born 1949, January 31st in southern Indian state of Kerala. He used to recall some of his early memories as walking the paddy fields with his blind dog – Vellu. Although born in a Nair family; the post independence India was a tumultuous time with land reforms and other major social change overs. He used to share vivid memories of his childhood such as men bringing his fathers body to their Tharavadu – traditional Nair house. After the death of his father unexpectedly- he was left a semi-orphan. Little master was raised by his maternal grand parents. Often he had to carry mangoes and other vegetables that his grandmother would then sell at local farmer’s market to feed his hunger. He had to endure lot of ignominy and pain growing up. He often had to defend himself against all odds as a young boy in the streets of Thamalam, his native place in Thiruvananthapuram. He started training kalaripayattu at a young age and this build a fighting resolve and resilience in him. He had multitude of experiences during his childhood standing up for his rights.

By age 16, his maternal uncle took him to Bombay, where he joined Boys Navy. That was a transformative experience for him and the young man, who came out of training was well rounded, strong willed and completely dedicated to his friends. There are many stories of young master coming for leave at his native place and taking up issues. He took strong initiatives to get rid of societal afflictions including illicit drugs, alcohol or other injustices, where he felt compelled to intervene.

Master joined signal school and was commissioned as a petty officer. Due to his courage and resolve, he was quickly promoted and was assigned to lead many commando operations. He served during Indo-Pak war in 1971 on various ships. Post war, he met his beautiful wife, my amma through arranged marriage per traditional Kerala matrimonial arrangement. They fell in love and were married for long 48-years. They moved to Cochin, while he was working at the Naval base there. During this time, as recounted by his friends of that time – he was a man of extraordinary personality, who would attract a crowd, wherever he goes. He could speak fluent English and Hindi. He made several friends and fiercely defended them when needed. By 1978, Gayathri my sister was born and 1980, myself Girish was born. After a brief stint in Andaman, as one of the earliest naval group deployed there, he helped build bases in many islands including Kardeep. Master resigned from Indian Navy after 16 long years of service.

Master went to Saudi Arabia for 3 months to help the family. However, he was ridiculed for being an Indian by a native. Even though knowing it would likely cost his life, he went on to strongly oppose that remark and soon returned back to India. Master established ISMA in1983 for training martial arts to young people and build a better society by training young people. The motto was – Trains for a better tomorrow; a strong mind and strong body. He started teaching class at the police training college and also at several local schools. During this time, he also met many masters of Kalari and marma chikiltsa – Louis Ashan, Moolachal Narayanan ashan to name a few. He perfected his marma (pressure point) treatment skills through these years of arduous effort.

Master was very popular as a problem solver during this time period in Trivandrum and many people came to him from all walks of life to get help and advise. He had many students and his center became one of the best in Trivandrum. I recall many days running on the ground followed by hard practice culminating with a meditation session. Master used to take us to different forests for camps and taught us basic life skills for survival.

In 1988, he moved his school of martial arts to a different center in Trivandrum. When he went there, he was amazed and amused by the night guard at the center. Speaking with him – he realized that the guard( here on called as guru apoopa) was an extremely pious person, who practiced highest level of spirituality. Guru apoopa realized that master was in fact his Guru – swaroopanda swami’s best friends son. He made arrangements to have master meet Swaroopanda swami at his ashram. Thus started next phase in his life of spiritual practice.

In 1993, he built a permanent center for Kalari practice and treatment at Vazhuthacaud. During the next several years he popularized kalaripayatt both inside and outside India. He was televised around the world through different documentaries about Kalaripayatt and started traveling outside India for giving workshops. He was invited to several prominent universities including Sydney – where he taught workshops regarding marma therapy. He met Michael Murphy in 2000, who introduced him to America. He had since then made several trips to America and made a very long list of friends, disciples and family there. In 2001, he built and dedicated a place of rest for swaroopanda swami and officially took diksha to become sanyasi. He devoted several hours a day to realize his spiritual self through meditation and ramayana chanting.

In 2003, master established the ashram at parasuvykal – Dharmikam. He became known as the “Warrior Sage”. He took up the official spiritual name of “ Swami Dharmanada Swaroopanada Hanumandas”. He believed in dharmik principles and through his spiritual and healing practices helped several people heal chronic conditions. He was also very interested in organic farming and his love for animals was heartening. I had seen him most happy when playing with his puppies. He had many cows in his gosala. He was awarded the best dairy farmer by Kerala government many times.

Master had a purpose in life. Unlike other spiritual gurus reciting sacred texts, his humble beginnings and life long learning taught him several key life lessons. He used this knowledge and spiritual practice to communicate with others in a dependable language understood by the person sitting across him. A key listener, he often would sit quietly scribbling on his pad or playing drums, when those who had afflictions spoke about their agonies, whether physical or mental, for themselves or for close friends. His key acumen and innate instincts led him to often predict future and present ailments for patients or family members without even seeing them or ever being told anything about the problem. Such was his God given quality that he could channel his divine energy to the cosmic energy and accurately predict future events. Which many of us can attest came true on all instances. His voice had a special quality that people came down to hear him sing bhajans.

Master was loved and adored by many. Through these years he had also been fighting diabetes related complications. Even in pain, he would go over to the ashram to meet people coming there and do satsang and bhajans. He continued to emphasize strong dharmik values and took center stage reforms locally, such as empowering women against a local distillery. For some this was controversial to have a swami be at forefront of local agitation. But he always had strong values, views and he was a true patriot.

Over the last few months, his health took a downward spiral. He had to be hospitalized multiple times due to infection in his leg due to diabetic complications and his kidney and liver started failing. His birthday was celebrated by people he loved, where they celebrated his life. Lately, on Mar 15th he was hospitalized again. This time it was very serious and he needed vasopressors to support his blood pressure. Such was his dedication to his promises, he stayed back to help celebrate a students birthday before being hospitalized. Even when he was in the icu, he made his driver call someone else to help a small kid get a school admission. By the time, I arrived on the 18th he was gravely ill but awake and alert. He asked me to take him home and indicated it was his time. He never wanted to be on a ventilator and did not agree for dialysis. He was brought home and overnight on 19th his health condition deteriorated. We started chanting Ramayana. Amma was holding his hand and I was at his feet. Sacred water from Ganges was given to wet his mouth. He made his heavenly abode peacefully on 11.15 AM on Mar 20th with lot of loved ones around him chanting Ramayana. Per his wishes, his body was cremated within 6 hours near the temple.

Such is my sorrow that it engulfs me when least expected. But as a father-son we shared a special bond. We loved each other very much but often he taught me to stand up to him. His place in my heart and the void it created can never be filled. However, he had trained me well to think straight even in the direst circumstances and I am determined to keep his and my forefathers legacy alive. As a family, we are overwhelmed by the tremendous response received from all the mourning well wishers around the world. I had received numerous phone calls stating how dearly he has touched that particular person, whether it is to help them with their education, treatment of cancer, moral and physical support.

My father is a real hero, who always said “Here lays a man, who had dreamt big and was fortunate to achieve all his dreams”. His wealth was the true love and the human connection he made. He never bothered to be politically correct but he stood for dharmik values. I am truly blessed to be his son.

In the immediate short term, we are inaugurating a multi-disciplinary Ayurvedic clinic on 7th of April after the 16th day ceremony. We intend to build a very beautiful memorial at the place he was cremated at the ashram. There will be a Remembrance Day on April 9th at 5 PM Indian time. We welcome you to join in person or through zoom.

I would conclude by saying his own words – Death is an illusion, I will always be here amongst you in my ashram.

Peace be with you