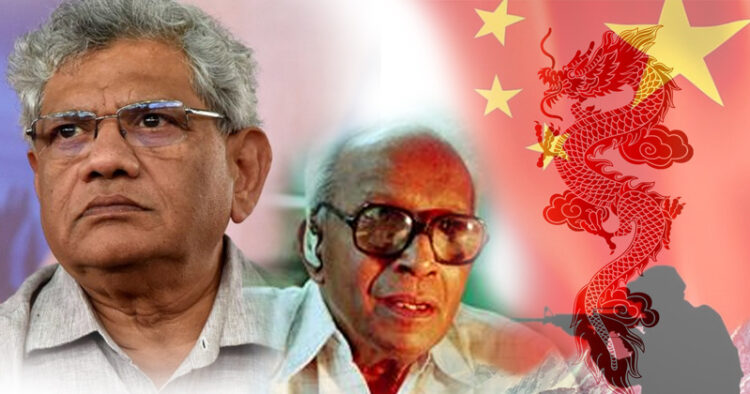 In comparison to the Bolshevik Revolution, the Chinese Revolution had little impact on India’s Marxist elite. The Russian working class’s escape from capitalism’s chains has shocked many Indian leaders, including Nehru. While the Communist Party of India (CPI) lauded the Chinese Revolution as a watershed moment in history, they saw the Soviet Union as a precursor in intellectual, strategic, and policy considerations.

Former Foreign Secretary Vijay Gokhale said in his book ‘The Long Game: How the Chinese Negotiate with India’ that China exploited its tight relationships to India’s Left parties between 2007 and 2008 to develop domestic opposition to the Indo-US nuclear accord. While the CPI (M) leaders refuted the charges, Gokhale observed that several communist leaders had travelled to China for medical treatment at the time.

Sitaram Yechury responded to Vijay Gokhale’s revelations by quoting the BJP’s opposition to the US nuclear accord. The BJP never rejected the nuclear accord on the basis of foreign proposals. Not only that, but when the transaction became more transparent, they shifted their position to benefit the country. That is not the case with the Communists. The Indian Communists have a history of publicly backing international allies, even when their interests conflict with those of India. When Indian public support is against their international partners and deemed to be politically incorrect, they kept an ambiguous stance. Communists are perpetually engaged in this double game.

This is not the first time the Left parties has chosen the concern of their international masters over national interest. Prior to independence, in 1939, the Undivided Communist Party of India (CPI) failed to fight Hitler when the Soviet Union and Nazi Germany were on the same side. When Hitler invaded the Soviet Union in June 1941, however, Moscow informed the Indian Communists that the true conflict was between fascism and its allies. As a result, they aided the British during the war. For this reason alone, the CPI withdrew from the 1942 Quit India Movement and heeded Russia’s pieces of advice. They morphed into a chameleon, and the CPI became the strongest ally of the British and became the Nazis’ arch-enemy. During the war, the British Communist party sent a message to their Indian counterparts. The letter stated that trade unions should assist in increasing manufacturing production to aid Britain during the war. Sir Reginald Maxwell, the British Home Secretary to the Government of India at the time, transmitted this disrespectful letter to the Communists leaders, who were forced to quickly carry out those orders. Britain promised in exchange to relax government control over trade unions and to release Communist Party leaders imprisoned. During this time period, top CPI leader Gangadhar Adhikari advanced the “Pakistan Thesis” in 1942, following the Muslim League’s seizing of the seeds of India’s partition. This resulted in the CPI publicly endorsing the establishment of Pakistan.

When India attained independence in 1947 after a prolonged conflict, the Communists dismissed it as a sham. B T Randiv, the Communist leader, yelled the phrase “Ye Azadi Juta Hai.” Communist movements in India have historically had an anti-national stance. They served as Hitler’s foot soldiers throughout World War II. When Hitler invaded the Soviet Union, the Indian Communists became Allies with Britain. When India attained independence, communists failed terribly in their attempt to capture power via revolution. As a member of the NAM (Non-Aligned Movement), the Nehru government pushed India closer to the Soviet Union and entangled it in communist ideology. Apparently, there was a strong undercurrent in India between the socialist Nehru and the Communists. They were all motivated by the same ideology: Socialism. They stood with Nehru and worked relentlessly for the Soviet Union’s interests only for these reasons. China has emerged as a green paradise for worldwide communists since the demise of Soviet Russia in 1991. Thus, Indian Communists treasure socialist utopia by emphasising China.

The Communists’ pro-China operations have continued since the post-independence period. When China invaded Tibet in 1959, the Indian Communists backed China completely. On March 31, 1959, the unified CPI published a statement justifying China’s manslaughter in Tibet and praising China for its efforts to liberate Tibetans from “mediaeval darkness.” The Indian Communists made no qualms in blaming the revolt on Tibetan freedom fighters, portraying them as traitors backed by Indian reactionaries and Western imperialists.

Throughout the 1962 Indo-China War, while the country was opposing China’s immoral activities, the CPI took an overtly pro-China attitude. The party even opposed blood transfusion to wounded Indian soldiers, describing it as an “anti-party operation,” and Communist leader and Kerala Chief Minister EMS Namboodiripad publicly backed the Chinese. Namboodiripad refrained from referring to China’s invasion and brazenly pleaded with India to cool up and appeal for peace and discussion. “We are not prepared to abandon our conviction that culpability for the Chinese crimes of October 1962 should be shared with India’s ruling class, which just took a highly confrontational attitude,” he said.

During the 2017 Doklam standoff with China, the CPI (M) adopted a vague posture in order to appease its Chinese patrons. As part of their show of affection for China, the CPI (M) published an editorial in the People’s Democracy newspaper. Bhutan should be endorsed to negotiate with China on the Doklam Plateau and other disputed territories, which India should allow. India is capable of defending Bhutan’s stance.”

Following China’s invasion of the Galvan Valley in 2020 and the ensuing conflict with India, the CPI (M) released a statement on June 16 in which they did not condemn their Chinese fathers for the aggression. The party recommended in their report that the Government of India issue an authoritative declaration regarding the events in Galvan.

Although the conflict between India and China has not been addressed, Indian communists recently participated in festivities commemorating the Chinese Communist Party’s 100th anniversary.

In short, if we examine the Communist Party of India’s whole history from pre-independence to the present day, we see that, rather than promoting greater national interests, they followed the lead of their global masters. They adopted ideologies and activities that suited them. They will identify with national objectives only if it does not jeopardise their international loyalties.

The author can be reached at [email protected]