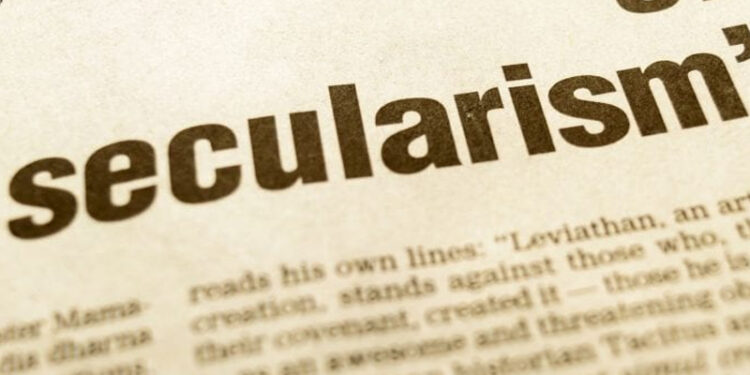 Secularism is the chief weakness of our age. It might have given us some means but it has certainly denied us the ends. Civilization is a way of life, a movement of the human spirit. Its character is derived from its conception of the nature of man and his destiny.
Secularism which replaces man with money or the spirit with the State, has paved the way for incalculable destruction through the lust for power, the joy of cruelty and the pride of dominance. The two world-wars have amply demonstrated this.
Our leaders time and again proclaim at the top of their voice that ours is a Secular State and that our brand of Secularism is a very special one: The State will have nothing to do with any religion. But in practice it always so happens that the State has everything to do with Hinduism and absolutely nothing at all with other religions! These leaders were in a tremendous hurry to push through an unfortunate legislation viz. The Hindu Code Bill* in an ad hoc Parliament, whose business was over with constitution-making and which was not expected to transact any legislative business, much less a radical one. A legislation of such a fundamental character which uproots at one stroke the laws and traditions of thousands of years of millions of Hindus is to say the least, a reflection of the ‘I-know-everything-you-shut-up’–attitude! Even supposing many of these reforms were desirable, leaders of various strata in the society whom they are going to affect should have been consulted. On the other hand the very same leaders and their ‘illustrious’ successors dare not make a single change in the personal laws of other religious communities! As if they are too perfect to need reforms! If our State is truly ‘secular’, there should be one uniform civil code governing all the citizens of our country irrespective of their caste, creed or religious denomination.
To give another example of this perverted secularism: Temples and their properties are being controlled by the Government through the Religious Endowments departments, but neither the Wakfs nor the Churches are within the purview of these departments!
Then again: Family planning has been taken as a policy on a priority basis. The loops and the pills whose dangers are being exposed by scientific journals of the West are being thrust upon an innocent society. And the victims are once again the Hindus, who are falling a prey to the subtle and deceptive propaganda which has no scruples to bring in the names of Sri Rámachandra or Kunti! No wonder if the Hindus become a minority in their own country within the next two or three decades!

*Many are not aware that Dr. Rajendra Prasad, the first President of our Republic was bitterly opposed to this legislation. For the correspondence that ensued between him and Pandit Nehru see Bhavan’s Journal Feb. 25 and March 10, 1968.

Tags: What Every Hindu Ought To Know
Share6TweetSendShare