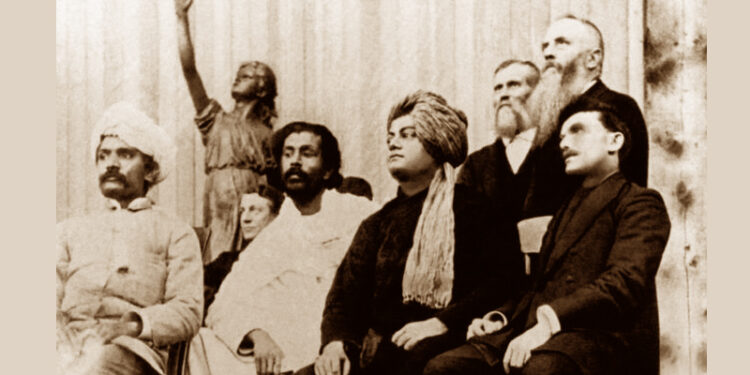 Hinduism is like the ‘centre-of-gravity doll’ which regains its equilibrium howsoever it be disturbed. Wave after wave of alien invasions have come and gone upon this sacred land but none of them really succeeded in uprooting it. That is because the basis of Hinduism is strong and sound. Standing firmly on this, it has always shown a remarkable dynamism, a unique capacity for change and adjustment whenever circumstances have demanded it.

Whenever the essential core was forgotten and too much fuss was made over the non-essential crust, there has always been a reaction and a rebellion from its own ranks to put things in their proper perspective and show a better way in conformity with the times. When the simple Rig Vedic religion was developed in course of time into a highly complicated labyrinth of sacrifices, there arose the dynamic sages of the Upanishads condemning it in no uncertain terms and preaching the direct method of realising the truth through contemplation and knowledge. This was the first reform movement.

This was further supplemented by the next movement started by the Gitáchárya Sri Krishna who reconciled the warring groups of his times, who were advocating either action or knowledge or contemplation or devotion. He provided a place in his system for every one of these in such a way that one need not be in conflict with the others.

Then came Buddha, the compassionate, who was more interested in the greatest good of the largest number than in the philosophies of the privileged few. Teaching simple moral and spiritual principles bearing more directly on the life here than on the life hereafter, he captured the hearts of millions and set a dynamic spiritual revolution into motion.

Buddha’s apparent condemnation of the Vedic religion and his discreet silence on the life hereafter were thoroughly misunderstood and even misrepresented by his later followers. It was given to Shankara, the first missionary Hindu monk, to make a whirlwind tour of the country, expose their fallacies and re-establish the pristine glory of Hinduism. By admitting Buddha into the galaxy of incarnations the Post-Buddhistic Hinduism sealed the fate for Buddhism in India once for all.

Then followed an era of invasion and conquest by foreigners and it looked as though the Eternal Religion would just collapse. However, the task of keeping it very much alive was admirably fulfilled by the various Bhakti-movements started by Rámánuja, Madhva, Basaveshwara, Chaitanya, Rámánanda, Kabir, Nának, Mirábái, Tulasidás, Tukárám, Purandaradás and a host of others. Special mention must be made of the Sikhism of Nának, which effectively prevented large number of people from being forcibly converted into Islam. No less important was the movement started by Rámánuja to broaden the outlook of Bráhmin orthodoxy.

The British conquest as also the impact of Western civilization with its science, technology and Christianity gave another shaking to the native religion and culture. Bang came the reply in the form of several reform movements each trying in its own way to set things right. If the Brahma Samáj and its offshoot, the Prárthana Samáj tried to give a ‘Christian look’ to Hinduism, the Árya Samáj tried to bring back the pure Vedic religion. The Theosophical Society too tried to do its bit with its mystical and esoteric doctrines. However it was Sri Ramakrishna and Swami Vivekananda who struck a perfect balance between the past and the present, the East and the West by showing the people how to combine the best of both. This regeneration is still continuing through the work of the Ramakrishna Math and Mission and other organisations drawing inspiration from them.
A very recent attempt at uniting the Hindu society, protecting and spreading its religion and culture, is the formation of the Vishva Hindu Parishad.

Tags: What Every Hindu Ought To Know
Share16TweetSendShare