A Few Rituals and Sacraments of Hinduism 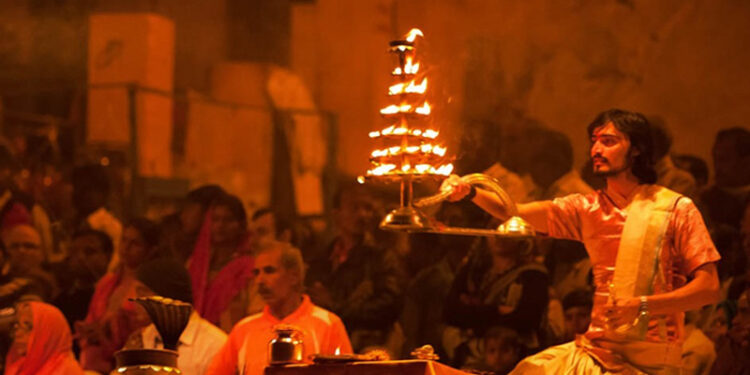 It will not be out of place here to dilate a little upon a few of the more important rituals and sacraments that have embellished Hinduism since ages.

Sandhyá is the ritual practised at dawn, noon and dusk. Ceremonial sipping of water (Áchamana), rythmic breathing (Pránáyáma), expiation of sin (Aghamarshana), offering water to Sun-god (Arghyapradána), repetition of the Gáyatri Mantra coupled with meditation on Sun-god and obeisance to Sun-god (Upasthána)–these comprise the ritual.

The mode of Puja or worship is a replica of the services that are usually rendered to a beloved guest or an honoured king. Only, the King of kings is the recipient here! After invoking the presence of the Deity (Áváhana), a seat is offered (Ásana); the feet are washed (Pádya); a respectful offering of water mixed with sandalwood paste and rice is made (Arghya); sandalwood paste is smeared (Chandana) ; flowers are offered (Pushpa) ; incense is burned (Dhupa); lighted lamp is waved (Deepa) and food offering is made (Naivedya) along with drinking water (Pániya). Finally the Deity is given a farewell (Visarjana).

Homa is actually Vedic sacrifice adapted to Ágamic requirements. It is nothing but Puja offered to the Deity invoked into the sacrificial fire. Except in some details it is almost identical with Puja.
Samskára literally means a purificatory rite. It is socio-religious in character. By performing it, the life of the Hindu is sanctified.

Though the Samskáras are sixteen in number, only the principal ones mentioned above, will be dealt with here.

Játakarma is the rite performed imme-diately after the birth of the child. Repetition of a Mantra for the generation of talent (Medhá-janana) and wishing the baby longevity and strength are the main items involved.

Námakarana or name-giving ceremony is performed usually on the tenth or the twelfth day. The choice of the name for the child is generally associated with religious ideas.
Anna-práshana is the first feeding of the child with solid food which has been previously consecrated by offering it to various deities.

Upanayana or the sacrament of initiation into higher life stands for taking the child to a teacher for education. From the cultural point of view this is the most important sacrament. The most striking feature of the Upanayana lies in the belief that by its performance the initiate is given a cultural and spiritual rebirth. It is a great advance over the primitive types of initiation like the endurance test, temporary seclusion or mutilation of the body still current among many religious communities.
Receiving the loin-cloth (Kaupeena) and the girdle (Mekhala), investiture with the sacred thread (Yajnopavita-dháraîa), initiation with the Sávitræ Mantra (better known as the Gáyatri) and going round for alms–these constitute the most essential aspects of the ritual. The first symbolises the beginning of a life of self-control. The Yajnopavita suggests that from now on, his life is a continuous sacrifice. The Gáyatri is particularly apt for a celibate student seeking intellectual development in the right direction. It marks the beginning of a life-long spiritual struggle. Going round for alms reminds him of his dependence on society whose debts he has to discharge throughout his life.

Of all the Hindu sacraments, Viváha or marriage is considered to be the most central one. Hinduism rightly emphasizes the importance of the life of the householder. The sacrament of marriage impresses upon a person that earthly life is not to be despised; rather it should be consciously accepted and elevated to the level of spiritual experience. Marriage is not a license for indulgence, but a human institution aiming at moderation in conjugal life leading ultimately to the conquest of self. It is essentially a fellowship between a man and a woman who seek to live creatively in a partnership for the pursuit of the four Purushárthas. Besides the two parties to a marriage–the bride and the bridegroom–there is the third party, Dharma, (their joint religious duty) through which only they have been united. Consequently a Hindu marriage is considered to be too sacred to be dissolved.

The most important steps of this sacrament are: Kanyádána (gift of the bride to the bride-groom by the legitimate guardian), Viváha-homa (marriage offerings in sacred fire), Páni-grahana (clasping the hand of the bride by the bridegroom), Saptapadi (walking seven steps), Ashmárohana (mounting the stone), Suryalokana (looking at the sun) and Dhruva-darshana (gazing at the Pole-star).
Pánigrahana symbolises that the bridegroom has taken over her responsibility here-afterwards. Saptapadi is symbolic of prosperity and felicity. At the end of this ceremony the bride passes into the family of the bridegroom. Marriage is regarded as complete with it. Suryalokana indicates that the sun is a witness to the sacrament. Ashmárohana and Dhruva-Arundhati-darshana represent stability and constancy.

The last sacrament in the life of the Hindu is Antyeshti. Since a Hindu consecrates his entire life through the performance of various sacraments at suitable stages, at his death, his survivors consecrate the event by death-rites for his future good and spiritual felicity. Though performed after a man’s death, this sacrament is no less important, because for a Hindu, the value of the next world is higher than that of the present.

It is customary to drop Ganga-water and Tulasi leaves into the mouth of the dying person. The body is carried on a bier by the nearest relatives and friends of the deceased. It is then either cremated or buried according to the custom of the community. If cremated, the ashes and the bones are later on collected and immersed in the sacred waters of the nearest river. If buried, a mound is raised over the remains as a mark of remembrance. Shráddha or offering to the dead also forms an important item of the last rites. It is performed on the eleventh or the thirteenth day after death and consists of Homa, Pinda-pradána (obsequial offering of rice balls) and feeding the Bráhmanas.