Place of Rituals, Temples and Festivals in Hinduism 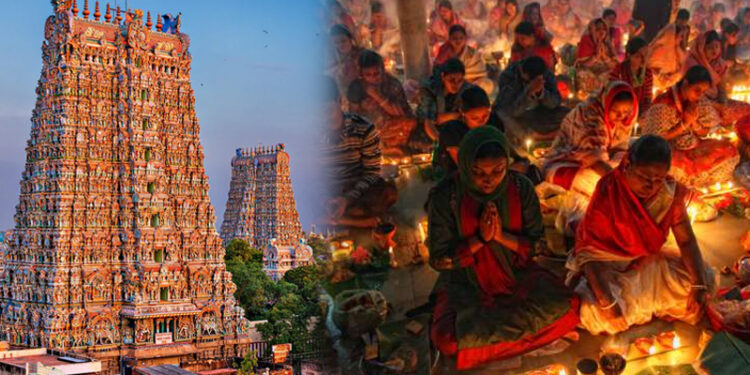 Philosophy without religion becomes meaningless. Religion without rituals becomes insipid. The rituals of a religion, like the husk of a seed, preserve its life and make it germinate. It is only when the rituals are separated from the faith and assumes an independent existence that they become mechanical and lifeless.

Human beings have not yet reached those heights where they can dispense with all sorts of symbols and rituals and devote themselves to purely abstract principles. A flag-hoisting, an oath-taking or a convocation is as much a ritual as worship or sacrifice. To give a concrete shape to the abstract spiritual ideals and to add colour and zest to life, Hinduism recommends the performance of several rituals. Out of these, a few are obligatory and the rest are optional.

Practice of meditation at sunrise, noon and sunset with the repetition of the famous Gayatri Mantra, worship of God through symbols and images, offering oblations into specially consecrated sacrificial fires–these were some of the rituals obligatory on almost all the Hindus during the ancient days. Even to this day, these have been kept up though in a modified form, and with lesser intensity. A wisely planned and solemnly conducted ritual prepares the ground, creates the atmosphere, suggests the mood and predisposes the mind so that the spiritual aspirant may easily detach himself from the world and feel the mysterious presence of the Supreme Power called God.
Hinduism considers religion and spirituality to be purely a personal affair. It concerns with the eternal relationship between the Eternal Soul and the Eternal God. Hence the Hindu is obliged neither to build a temple nor pay a visit to it on any particular day. To him his own body is the temple, the abode of the Lord. However, for the sake of the ordinary people who are incapable of comprehending this truth, who always need an external support for the practice of their religion, temples are recommended. Even the temple is only an external symbol of this body. In fact, many of the technical names of the various parts of a temple are identical with the names of the various parts of the body. Actually the temple represents the Lord and His creation (the universe) in all its aspects.

Usually the gateway to a temple will be a massive and magnificent construction. When we stand in front of it we are made to feel so insignificant before the Lord of the universe! As we proceed inwards leaving behind the grand carvings and decorations of the outside, we notice that the sanctum sanctorum itself is small and dark. We can have the darshan of the Lord only when a light is lit up and waved before Him. This indicates that we have to leave the grand external world outside, direct our minds inward, light up the lamp of knowledge there and behold the Lord within the sanctum sanctorum of our hearts.

Ours has been a land of temples. There is no town or village without a temple, be that of Shiva or Vishnu, Devi or Hanuman, Ganesha or Subrahmanya. They are standing monuments to the continuing spiritual traditions of our country. And they have played a very significant part in the community life of our country, helping to preserve and enrich our religion and culture, arts and crafts through játras, rathotsavas and festivals.

Festivals connected with certain sacred days and associated with certain temples or rivers or places of pilgrimage, have been another potent factor in the religious life of our society. Though the rules and regulations of a festival introduce an amount of austerity in personal life, they also lighten this burden and elevate the mind when performed properly. A rathotsava (temple-car festival) or a mela (religious fair) has its own story to tell and lessons to teach. The former seems to signify that if you are too busy to go to the Lord, He Himself will come to you! The latter provides an opportunity for like-minded devotees to congregate in a place and strengthen one another’s spiritual vibrations. That is why they have become part and parcel of our life, for centuries.

Tags: What Every Hindu Ought To Know
Share48TweetSendShare