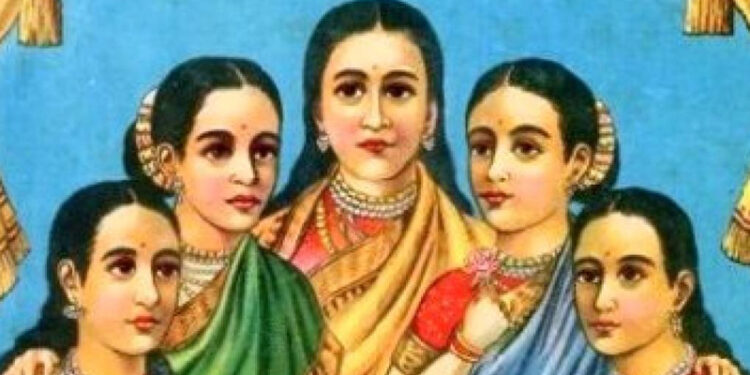 No bird can ever fly on only one of its wings. Women being the ‘other-wing’ of the society it is but proper that their role be discussed here.

Ideals constitute the very heart and soul of a nation. Hence a real understanding of the Hindu nation and its womanhood would essentially depend on that of its ideals. As already stated, Hinduism considers Moksha or spiritual freedom as the summum bonum of life, whether for man or for woman. Consequently the disciplines described and the paths prescribed for the attainment of this Moksha are almost identical. Purity, self-control, devotion and austerity are as much necessary for woman as for man. However Hinduism does not shut its eyes to the differences that do exist between man and woman, biological as well as temperamental. That is why it has defined their areas of activity depending upon their Svadharma or special characteristics and prescribed slightly different modes of life and discipline.

The strength and the soundness of a society are sustained by those of the family; and woman is the central figure in a family. Just imagine the tremendous responsibility that is placed on her! A Griha or home is no home but for the Grihini (the mistress of the family). Hence the ideal placed before the Hindu woman is that of the ideal Grihini, who again is an ideal wife, an ideal friend and an ideal mother–all rolled into one. It is Sitá, Sávitri, Damayanti and Gándhári–the songs of the Hindu soil–that have inspired the lives of millions of Hindu women for aeons, and not Helens or Juliets.

Women had plenty of freedom in the Vedic and Epic age. They had equal opportunities and scope, especially in the religious and spiritual fields. They could undergo the Upanayana sacrament, study the Vedas, become teachers or even ascetics if they wished. But during the middle ages there was a criminal neglect of their welfare.
With the advent of modern education, the impact of science and Western civilization, things have changed no doubt, but the remedy seems to be worse than the disease! Now woman seems to want to ‘out-man’ man himself! Getting discontented with her role of childbearing and home-making she wishes to devote herself to some other ‘higher’’ activity! Consequently homes are slowly being replaced by hotels! In the name of economic independence, life is tending to become more and more hectic, irregular and even vagrant! By engaging herself in activities which prejudice the work of preservation, the modern Hindu woman is coming into conflict with her own inner nature. By blindly imitating man, she cannot be the giver of joy, the inspirer of activity and the consoler in distress that she has all along been. This is what the world famous scientist Dr. Alexis Carrel says: “The differences existing between man and woman … are of a fundamental nature. Ignorance of these fundamental facts has led promoters of feminism to believe that both sexes should have the same education, the same powers and the same responsibilities. In reality woman differs profoundly from man. Every one of the cells of her body bears the mark of her sex …. Physiological laws are as inexorable as those of the sidereal world. They cannot be replaced by human wishes.”

What then is the solution? “But now female education is to be spread with religion as its centre. All other training should be secondary to religion,” says Swami Vivekananda. Mahatma Gandhi exhorts our women not to ape the West but apply methods suitable to the Indian genius and Indian environment. Says he: “Theirs must be the strong controlling, purifying, steadying hand, conserving what is best in our culture and unhesitatingly rejecting what is base and degrading. This is the work of Sitás, Draupadis, Sávitris, and Damayantis, not of amazons and proudes.”

Will our mothers and sisters heed this advice?