The Individual and the Society in Hinduism 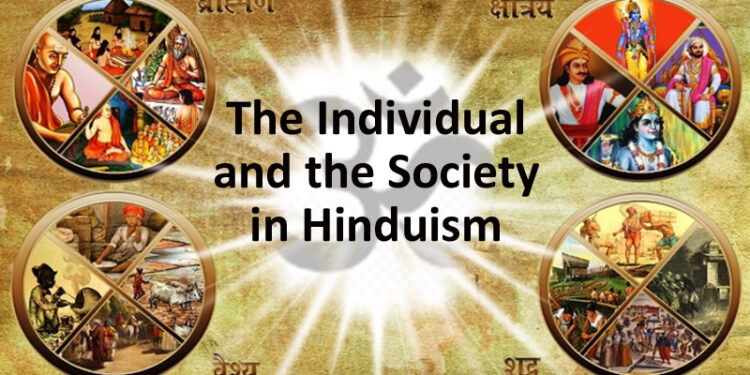 According to Hinduism, spiritual freedom or Moksha is the ultimate goal of life. But desires and passions which obstruct this do exist in man, ever struggling to find an outlet. It is not very easy to get rid of them overnight. Realising this, the great Hindu sages have provided us with right avenues for directing and guiding them. Looked at from this angle the conception of the four Purushárthas (ends to be striven for, by man) viz, Dharma, Artha, Káma and Moksha–is a unique contribution made by Hinduism. Acquisition and enjoyment of material wealth (Artha) and satisfaction of desires (Káma) should always be within the limits allowed by Dharma or righteousness. This helps their attenuation and man will become fit for Moksha or liberation in due course.

With this Moksha in view, Hinduism requires every man to pass through the four stages of life, technically called the Ashramas, viz, Brahmacharya (studenthood), Garhasthya (the stage of the householder), Vánaprastha (retired life in forest) and Sannyása (life of complete renunciation).

Study of sciences (spiritual and temporal) and a life of strict discipline characterised by self-control are the essential features of the first stage. Acquisition, enjoyment and distribution of the good things of life within the framework of Dharma, mark the second stage. The five daily sacrifices known as Pancha Yajnas viz, Devayajna or sacrifice to gods, Pitriyajna or obsequial oblation to the departed manes, Brahmayajna or study of the Vedas, Nriyajna or serving fellow beings and Bhétayajna or feeding the dumb creatures, are obligatory on the householder during this stage. The third stage wherein introspection is very important is only a stepping-stone to the final stage of Sannyása. This last stage which is the acme of life is distinguished by its total renunciation of worldly desires and a complete dedication to the attainment of Moksha.

Every rule has an exception. The ascent from Brahmacharya to Sannyása need not always be gradual. So the scriptures allowed double or even treble promotion to qualified aspirants. They could embrace Sannyása from any stage.

Just as the individual’s life has been divided into four stages to facilitate spiritual evolution, the society also has been divided into four groups (Bráhmanas, Kshatriyas, Vaishyas and Shudras) to facilitate smooth working.
The Bráhmanas were the custodians of spiritual knowledge. Simple living and high thinking as also acquisition and propagation of spiritual knowledge–these were their primary duties. The Kshatriyas protected the society with the strength of their arms and were responsible for the maintenance of law and order as also justice. It was given to the Vaishyas to produce wealth and distribute it without being greedy. Those who lived by manual labour and service to others were categorized as Shudras.

There has been a good lot of criticism against this Varna system, as this fourfold division is often called. It is to be remembered that this grouping was based upon the mental make-up and aptitudes of the individuals and as recognition of the division of labour that already existed in the society and not upon birth. However it is impossible to examine each individual determine what his aptitudes are and then fix his calling. And so heredity is made to serve as a sort of working principle. Normally the son inherits the trade of his father as he shares some of his traits. But this principle was never intended to be applied with an iron-hand. It was flexible and violable. There is a lot of evidence in the scriptures to show that man’s Varna depends upon his mental make-up and the calling he chooses. There have been several cases where people born in lower castes have risen higher by their virtues and those born in the higher ones have been degraded due to their vices. Hence it is obvious that the present-day caste system, with its water-tight compartments and mutual animosity is nothing but a gross degeneration of the once sublime idea that formed the basis of this division.

Tags: What Every Hindu Ought To Know
Share3TweetSendShare