The Philosophical Systems of Hinduism 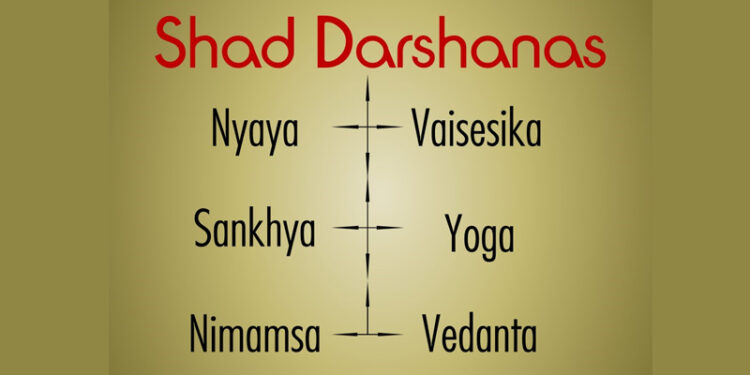 Ever since the beginning of civilization, the innate curiosity of man has been urging him to delve into the mysteries of the universe. Who created this universe? Who am I? Where did I come from? Where do I go after death? These were the fundamental questions posed by him. The relentless search for an answer to these basic questions has led to the origin and evolution of philosophy.

If the West sought in the external world for a solution, the Hindu sages turned their gaze inwards and discovered their own answers through meditation and mysticism. The ‘Shaddarshanas’ (six systems of Hindu philosophy) were the result. Darshana means vision of truth. Unlike the West, where philosophy based on pure intellectualism and religion based on a few dogmas of the Church are at loggerheads, philosophy in Hinduism has been, a ‘philosophy of religion’ and religion is based on the findings of philosophy.

The Nyáya and Vaisheshika advance the atomic theory of creation. Sánkhya propounds the theory of the animate souls and inanimate matter as the basic factors in creation. Yoga deals mainly with the control of the mind. Mæmámsa is more interested in upholding Vedic ritualism.

Last but not the least is the Vedanta, the pinnacle of all these systems. It can easily be called ‘The Philosophy of Hinduism.’ Vedánta means culmination of the Vedas. It is based on the Upanishads, the Gæta and the Brahma Sétras of Vyása, and gives the most rational solution to the fundamental problems posed by philosophy.
Vedánta calls that Supreme Power which projects this universe, sustains it and withdraws it into itself as Brahman. It holds the individual soul (Atman) to be birthless and deathless, eternal and immortal. Attainment of liberation is possible through the knowledge of Brahman, by being devoted to this Brahman. A liberated soul will never again return to mundane existence. These are its teachings in a nutshell.