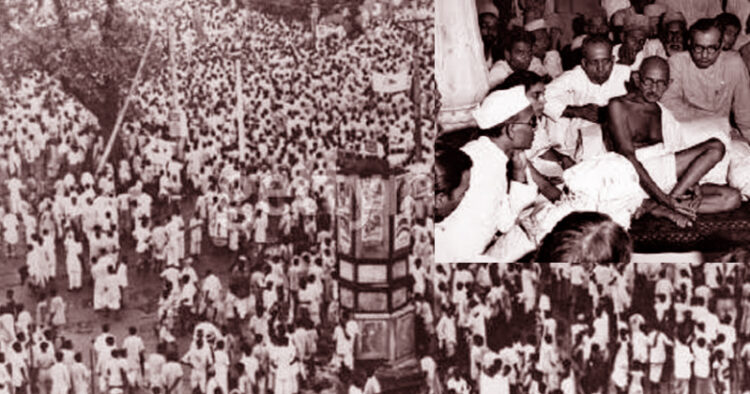 Khilafat Movement and Non-Cooperation Movement
To most Indians, the relation between the Khilafat Movement and the Non-Cooperation Movement is obscure. Generations of Indians have been taught that the Non-cooperation Movement was launched by Gandhi on 4 September 1920 “with the aim of self-governance and obtaining full independence as the Indian National Congress (INC) withdrew its support for British reforms following the Rowlatt Act of 21 March 1919, and the Jallianwala Bagh massacre of 13 April 1919.” This is the information provided by Wikipedia, the repository of wisdom for most modern literates!

Party ideologues posing as historians have taught impressionable minds that “Gandhiji hoped that by coupling non-cooperation with Khilafat, India’s two major religious communities, Hindus and Muslims could collectively bring an end to colonial rule. These movements certainly unleashed a surge of popular action that was altogether unprecedented in colonial India (Themes in Indian History Part III, Textbook of History for Class XII, published by NCERT, p.350). If one reads the official history of the Congress, one will be misled into thinking that the Non-Cooperation Movement was a brainchild of the Congress, launched to secure Swaraj (The History of the Indian National Congress, Pattabhi Sitaramayya, CWC, Madras, 1935, pp. 334, 335). If truth be the mother of history, the historian needs to be examine if history is being turned on its head!

Academic discourse
Some of the false discourse has been propagated by historians who doubtless had their own baggage. Thus, Scottish historian Sir Hamilton Gibb (1895-1971) portrays the Khilafat Movement as a reaction to rising Hindu nationalism. He writes, “Among all the Muslims in the world, those in India alone insisted on the international aspect of Islam, but in this their motive was a defensive attitude in the face of Hindu nationalism” (Whither Islam? A survey of the modern movement in the Moslem world, 1932, Routledge, p 73). Sometimes, the narrative of historians degenerates to the ridiculous. In his book Modern Islam in India: A Social Analysis (Minerva Book Shop, Lahore), Canadian Islamicist historian Wilfred Cantwell Smith (1916-2000)writes, “The word ‘Khilafat’ bore a strange meaning in most of the rural areas. People thought it came from ‘khilaf’ an Urdu word meaning ‘against’ or ‘opposed to’ and so they took it to mean opposed to Government. They were conscious of Islam as usual; but they were hardly conscious of Muhammad and the Sublime Porte” (p 234). D.G. Tendulkar repeats this absurdity in his Mahatma: Life of Mohandas Karamchand Gandhi (vol 2, p 47). So does The Centenary History of the Indian National Congress 1885-1995 (Academic Foundation, Delhi, 1985, Vol.2, p 66) published by the All India Congress Committee and released by then Prime Minister Rajiv Gandhi. No prizes for guessing that the Volume and General editors of this tome were Ravinder Kumar and BN Pande respectively, both doyens of Nehruvian secularism!

As an example of academic sophistry, the Khilafat Movement has been painted as a quest for pan-Indian Islam rather than pan-Islam (See The Khilafat Movement: Religious Symbolism and Political Mobilization in India, Gail Minault, Columbia University Press, 1982). Another ‘eminent historian’ Professor Bhojanandan Parsad Singh sought to discover Secular Strands of Khilafat and Non-Cooperation Movement in Bihar: 1920-22 (Proceedings of the Indian History Congress, Vol. 63, 2002, pp. 615-621). He alleged that “deliberate confusion is being caused by stressing on its religious aspects and undermining its secular character. Officially, even a mention of the movement has been conveniently deleted…” He goes on to narrate how Rafiq Zakaria protested against this in his article The Truth about the Khilafat Movement (The Hindustan Times, New Delhi, 24 August, 1997). According to the ‘eminent historian’, the Khilafat Movement was a logical development of the Gandhian strategy of; hold your breath, secular nationalism! Here are few more gems, “Gandhi’s Non-Cooperation and Khilafat Movements stand out to be secular National Movements aiming at free and democratic India where people of different faiths would live together like brothers…Non-violence was an essential condition of the Non-Cooperation and Khilafat Movements… “

Denial of history
The Khilafat Movement is also presented as a bolt from the blue, bereft of any theological or historical context. Care is taken to divorce it from its Hinduphobic character. Thus, Gargi Chakravarty writes in Mainstream ( Vol. LVIII No 6, New Delhi, 25 January, 2020), “Pan-Islamism, an ideology that sought to consolidate Muslims across the world against western imperialism did not become a living force in India until 1911, when a war broke out between Italy and Turkey. Britain formed a secret alliance with Italy. This led to the alienation of the Indian Muslims from the British. They felt that British imperialism was bent on destroying their Islamic culture. The alarm ‘Islam in danger’ was imbued with fanatical hatred against Christianity and British colonialists, not directed against the Hindus.” Chakravarty’s article was a paper titled Globalistion and Religious Diversity: Issues, Perspectives and the Relevance of Gandhian Philosophy, presented at an International Winter School, organised by the Ambedkar University, Delhi and Aarhus University, Denmark on 8-14 January 2020. Note that pan-Islamism is sought to be painted as a reaction to Western imperialism.

If such be the case of self-proclaimed secularists, can unabashed Islamists be left behind? Shaikh Imran Hosein, a Foreign Service Officer in the Ministry of Foreign Affairs of the Government of Trinidad and Tobago gave up his job in 1985 to devote his life to the mission of Islam. He writes the following about the Khilafat Movement, “British colonial rule imposed European political secularism ‘at the point of the sword’ as the alternative to Islam. Both Hindus and Muslims eventually challenged the new European religion of ‘secularism’, and sought to restore and to preserve their own indigenous political culture… The Khilafat Movement threatened to topple the entire system of European political secularism and constitutional democracy that the colonial West was forcing upon the non-White world. And so a British strategy was devised, in collaboration with Mustafa Kamal’s newly emerging secular Republic of Turkey, to abolish the Turkish Caliphate and, in so doing, to sabotage and to bring about the collapse of the Khilafat Movement with its alarming Hindu-Muslim alliance” (The Return of the Khilafat). Note how the Khilafat Movement is presented as a struggle to preserve indigenous culture and combat racial hegemony!

From past to present
A breed of ideologues masquerading as historians is hopeful that the Khilafat Movement of yore will bring a change in India’s present political dispensation that they have been yearning for! Gyan Prakash who teaches History at Princeton University draws parallels between the Khilafat Movement and the protests against the Citizenship Amendment Act. He writes, “Faced with the RSS-inspired assault on their place in India, the Muslims are stoutly asserting that they are Muslims and Indians, not Muslims but Indians. This calls to mind what Mahatma Gandhi attempted in the Khilafat movement, which used a Muslim grievance to launch a nationalist movement against the British. That too was a conjoining of the Muslim and Indian” (Why the protests remind us of Gandhi’s Khilafat movement , Economic Times, 12 Jan, 2020)

Current discourse on the Khilafat Movement may be predictably peddled on the following lines: “It was a Movement launched by an aggrieved community against their colonial masters, taking along their non-Muslim brothers under the overarching leadership of Mahatma Gandhi.” Replace the words ‘colonial masters’ with ‘Hindu majoritarianism’ and ‘non-Muslim brothers’ with ‘those downtrodden by an oppressive Hindu hierarchical system’ and you have a heady concoction for the present moment!

There is an urgent need to dispel the manufactured cotton-candy discourse on the Khilafat Movement. Make no mistake; the Khilafat Movement has relevance because the mindset that set it in motion 100 years ago is still at work. This mindset calls for a religiously sanctioned return of civilization to a seventh-century environment. Those who forget history are condemned to repeat it. Equally true, those who falsify history may not live to repeat it. It’s time to call the bluff!