Islamophobia: A Myth Or Reality 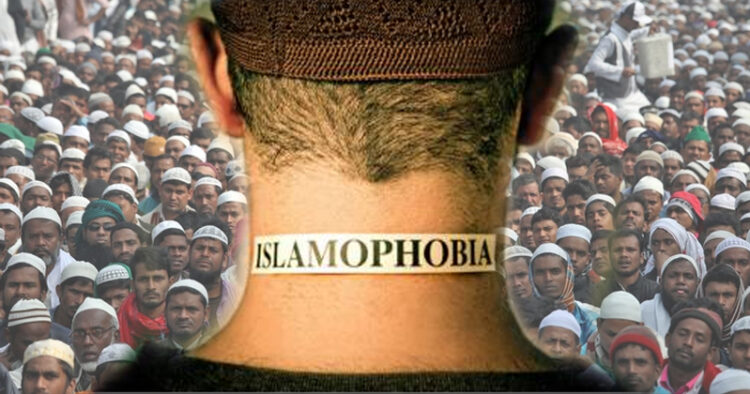 The term Islamophobia has not yet been defined properly. It has been described differently by the pro-Islamic and anti-Islamic groups. Academically neutral connotations have not yet been assigned to the term. The Islamist group of thinkers and activists described it as a false narrative used by the Eurocentric group of thinkers to prevent the spread of Islam as it gets wide -range acceptance among the people of the western world,especially among the Christians. They argue that, the European Christianity has lost its credibility due to many reasons, mainly for its non-spiritualistic inclinations. The spiritual vacuum of the people could be filled by the Islamic faith and the Europeans could find solace in Koran and they embraced Islam as their religion. The Euro-centric capitalism and Christian imperialism are intolerant to the acceptance given by the people to Islamic faith. They exaggerated the false narrations of cruelties of Islam with an intention to generate fear in the mind-set of the people to stop the growth of Islam.

The spread of Islamic religion all over the world along with the emergence of the terror groups as part of the Islamic faith are the facts which could not be denied or ignored when we think of Islamophobia. The indiscriminate violence thrusted upon the innocent people by the self-acclaimed redeemers of pure Islam, generated a type of inner fear among the non-Islamic people, specifically among those who subscribed to democratic mode of thinking. The members of the terror groups claimed that, what they did was the right way of the practice of the Islamic faith. They could quote the relevant aphorisms from the Koran to support their claim. These claims have not yet been denied or questioned by the Islamic clergy or the leaders of the community as fake statements. They have been preaching that, Islam is the only one true religion and all other religions are untrue. A religion which refuse to admit the authority of Koran has been branded as untrue religion which according to them has been prohibited by God. They presented their belief that, Koran has given them the authority to eradicate any religion which does not admit the authority of Koran. One who refuses to accept the Islamic faith, after knowing that Islam is the only true religion from a Muslim, deserves to be killed. They also claimed that the polytheists and idolaters could be killed then and there wherever the believers have seen them. Moreover, Jihad, the war in the name of God, has been prescribed as the duty of every Muslim. He who slay and got slain in the jihad has been ensured with high rewards by God. Nobody till date denied that such statements are not the part of Koran. If, these statements are the aphorisms of Koran then, there are reasons to get afraid of it.

Truth value of these statements is beyond doubt because, these statements are justified by the Koranic verses. It is reliably learnt that, these statements are being taught by the Mullahs as part of religious education provided to the Muslim children in the Madrasas all over the world. The Madrasa education, given to the Muslim children, is capable to inculcate hate against the persons belonging to the other religions in their tender minds. Hate in turn generates fear in their own minds. The primary aim of education, including religious education, is to redeem the minds of the students from hate and fear. But the Madrasa education on the contrary generates hate and fear in the minds of the students. A system of education which causes to shrink the minds of the students and generates fear in them is dangerous to humanity.  No responsible person either from the clergy or laity has ever taken the initiative to remove such negative statements from the curriculum content of the Madrasa education. Hence, the fear of Islamic religion generated in the minds of the people of other religion cannot be denied as, fear begets fear. Whether, it is real or falsely fabricated by the interested groups of people of European countries and their propagandists, as the Islamic intellectuals have alleged it, can be a topic of debate.

The organization of Islamic cooperation (O I C) outrightly rejected the very idea of Islamophobia as a fake belief in its report of its 11th annual meeting. At the same time, it has been admitted in the report that, the Islamophobia shattered the socio-cultural fabrics of Europe and the rest of the western world. The terrorist attacks in the name of Islamic faith occurred in the different parts of the world during the last two decades are facts rather than fiction. The demolition of the trade towers in America and a series of bomb blasts occurred in various parts of the western world really terrified them. The attack against the parliament building in India and the attack against the Taj Hotel in Mumbai, apart from several bomb blasts intended to kill the innocents in India, generated fear in the minds of Indians.

The Islamic terrorist groups all over the world and their Indian counter parts owned the responsibility of the attacks, placed the Muslims, even though, the majority among them are peace-loving and innocents, under the shadow of suspicion and distrust. This has been one of the factors for the increase of the suspicion in the minds of the non-Muslims on the Muslims. The lack of earnest efforts to ally the fear generated in the minds of people belonging to other faiths, from the part of the Muslim leaders, accelerated fear and suspicion in the mind of the non-Muslims.  The political leaders and the clergy adopted a tactical step to argue that Muslims are being targeted by the opponents for political reasons. They were not able to find any fault with Shakir Naik, a notorious preacher of militant Islam and they rescued him as an innocent victim of the political and religious intolerance of the ruling party despite the speaking evidences stand against him. This is only one among the many examples for the negative attitude Muslim leaders and their counter parts in other political parties. They portrayed such clear evidences against anyone who propagates negativity as cooked up narrations of the opponents of Islam to defame the person and the religion.

When we think of Islamophobia, we cannot ignore these facts. One has to count two things before one discard Islamophobia as a fake narration. (1) Whether the Koran contains aphorisms promoting violence and hate or not. If Koran contains aphorisms promoting violence and hate then, any leader of the community has ever taken any effort to exclude such statements, at least from the curriculum content of Madrasa education? Is there any method either to dilute or to avoid the aphorisms promoting violence and hate from the text books prescribed to be taught in the Madrasas. If not, whether the authorities of the religion have ever taken the responsibility to conduct any study to assess the impact of the aggressive and negative aphorisms in the minds of the students. The chances to generate hate in the mind-set of the students against the persons belonging to other religion cannot be denied. (2)  Why the leaders of the clergy and laity alike refuse to interfere with the aphorisms that have negative connotations in Koran at least when they prescribe such aphorisms as part of the text for students? Why they refuse to realise that such negative aphorisms are the stumbling blocks for the creation of an egalitarian society? Are they afraid of blasphemy to add anything to the text or delete anything from it. If they refuse to interfere with the negative aphorisms, then, how can they lead a normal life in a pluralistic society. The aphorisms which promote negative connotations and hate propagate exclusive philosophy which is in consistent with democratic fabrics of our society. The minds of the people of Islamic faith and non-Islamic have been filled with fear. I think it is the duty of the Islamic people to take initiative to ally fear from the minds of the people belonging to other religions. The other should not be considered as a hell.