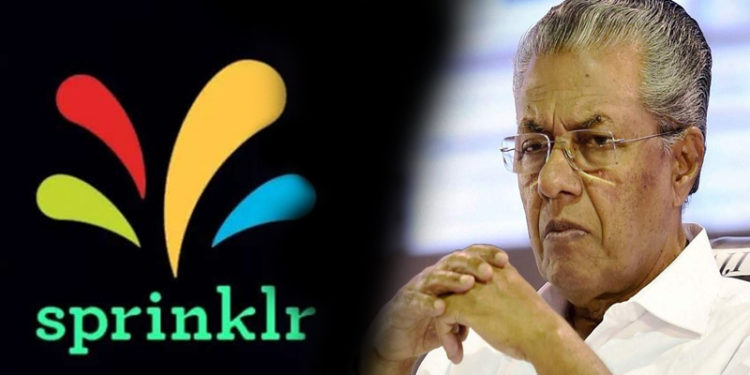 The whole world is fighting the deadly corona virus from the past three four months. India is leading from the front in this global war against the novel Covid 19. Kerala which is famous for its well celebrated health activities also had joined in this fight. It was when things were going well for Chief Minister Pinarayi  Vijayan and the Left government the Sprinklr scam issue came up. Sprinklr, the American corporal, led by Ragi Thomas, a Keralite by birth and working in IT sector promised to give a  software free of cost by collecting information regarding corona patients. They advised that this would be of great benefit to further treatment. All on a sudden Pinarayi Vijayan has decided to enter into an agreement with Sprinkler through IT department secretary Sivasankaran. On behalf of the government, IT secretary Sivasankaran signed a contract with the company. But every day a lot of mysterious information about the Sprinklr Company and the corona data collection were getting revealed.

The media and opposition parties asked about the leakage of information received by the Sprinklr company about corona patients and those under surveillance. But the chief minister’s first reply was that there is no need to clarify further. He avoided the media and advised to ask the IT secretary for clarifications. IT secretary on the other hand tried to save the chief minister by taking complete responsibility. He hadn’t  even sought any legal advice before setting up this deal. The chief minister refused to explain what the state had gained by turning over the most confidential information of the victims to an American monopolist. Instead, it was repeated that it was free service and that corona treatment would be benefited. The chief minister did not even respond to the question of how a private company is handling the personal information of the citizens of the country which has to be maintained domestically. Vijayan does not accept the fact that Indian public sector institutions like C-DAC and Keltron has the capability  to deliver all the services offered by Sprinklr.

Does this company have the authority to use any personal information?,Has permission been obtained from individuals? Shouldn’t the Chief Minister, who also manages the Information Technology Department of the State, be aware that all matters covered under Article 43 (a) of IT Act are outside the purview of the State and come under the jurisdiction of the Union Government?What is the responsibility of the state government if any personal information is leaked? Which Article of the Constitution did the chief minister set as the criteria for deciding not to clarify further on this matter? Mr. Vijayan is mum on many questions like this.

In terms of section 43 (a) of the Information Technology Act, the Company should pay compensation to such persons for any failure to maintain personal information without proper safety standards. Authorities are responsible for maintaining confidentiality of information, and for the publication of standards that protect them from unauthorized access and correction. All these things are outside the bounds of the state. They are to be governed by the central laws. Our laws also guarantee that such information may be made public only with the permission of individuals.The right to citizen privacy comes under the fundamental right to life and liberty under Article 21 of the Constitution. In other words, privacy is a fundamental right of any person. The Supreme Court has held that the personal information of a person should be managed via internet only with the full consent of the person. (Justice Puttaswamy vs Union of India 2017)

The sprinkler scandal has sparked controversy over the global drug market and the secrets behind it. IT companies are reaping billions of rupees annually by collecting patients’ bio-metric information and making it available in the form of software. Sprinklr is also not different from it. With the concealment of free service they reap big profits by collecting patients’ biometric and therapeutic information in software form and transferring them to drug manufacturing research. With these softwares, the big pharmaceutical companies will be able to facilitate the manufacturing of new drugs and to find new drugs. Therefore, the value of such software is much larger than that which is usually determined.Top international companies such as Bauer, Pfizer, Gladsmith and Skidline are leading the industry.

The controversial Sprinklr company has been linked to international companies such as Pfizer. In the areas outside of the health sector like education, finance and planning , the value of these software is worth over Rs 700 crore. The software chain, which uses biometric data collected from Kerala, can expect a market value of at least 1 trillion rupees in the pharmaceutical industry. Opposition parties also alleges that the the Bangalore based IT company owned by Mr Vijayan’s daughter has links with Sprinklr. Lot of questions are left unanswered.

It is becoming clear that that there is a big  corruption in the Sprinklr deal. And the fact that civil rights are being compromised are also getting proved. Only thing we need to know is for how much amount the health data has been set in the deal. It only needs the investigation of central agencies.