DHARMA IS THE FOUNDATION OF OUR RASHTRA 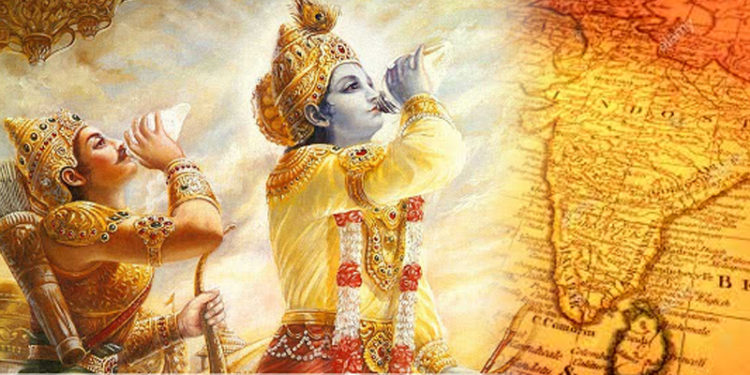 It is the unity, cohesion, mutual trust and love, and the feeling of oneness among the members, based on Dharma, that keeps a family healthy, strong, and make it exemplary. And, so is the case with a nation. But it is unfortunate, in Bharat, the ancient land that has been in vogue for millennia, we still continue with the ‘task’ of defining our nationalism or are ridiculously engaged in shaping it after the Western concept of a nation!

“When a determined nation elaborately plans for its own development and progress, apart from its political plans and economic schemes, it must necessarily look for its own cultural genius in order to impart, mould and polish the character of the individuals,” said the great Chimayananda Swamiji.

American scholar, Louis Leo Snynder, in his work,” Varieties of Nationalism: A comparative Study” makes it amply clear that even in the West, the nationalism of different countries did not have the same psychological ingredients, but they were all given the same generic name of nationalism. But we, who have not been able to overcome the hangover of the British legacy, refuse to think originally in keeping with our time-tested ethos, and accept that the Western concept of nation is different from our theory of ‘Rashtra.’ Hence, even after seventy years of independence, we have not been able to achieve national integration in the real spirit. We are least bothered about the usurpation of parts of our territory by China and Pakistan. But, at the same time, we are ready to kill our own people in the name interstate boundary disputes or over sharing of waters of our rivers. What happened in Tamil Nadu and Karnataka on the issue of sharing the waters of the Kaveri River in recent times is still vivid in our memory. And our wily politicians belonging to different political parties are the real villains in such matters. For them, everything is fair in winning elections! Moreover, unfortunately, a large number of our politicians are professional goondas or antisocial elements, whose only motive is nothing but self-aggrandisement. The most disheartening fact is that there are hardly any statesmen in our political sphere now, who think well of the nation or the people.

As a consequence, rather than dwelling on the points helpful in achieving unity and oneness among people and bringing about integration, we have been busy highlighting the superficial issues that create all sorts of divisions in our society in every conceivable way.

So we find here the spectre of all sorts of fissiparous tendencies getting promoted in the name of caste, class, religion, community, language, gender, region, sub-nationalism, and sub-culture, interstate disputes like sharing of waters, and what not! We are busy setting tribal against non- tribal, Dalits against non-Dalits, OBC against non-OBC, etc. Not satisfied with all these, we are out to set women against men in the name of gender equality and other trivial issues. What is most outrageous is that we seek to involve even the judiciary in such unsavoury controversies.  It is most pathetic that we don’t spare even Baba Saheb Ambedkar and drag his name also into controversies, who had emphatically said: “The society would have to come forward to undo the injustice done to our backward brethren during the last some centuries due to evil customs, and agitations would have to be launched, but not at the cost of national integration.”

Attempts have been made to alienate tribal people from the national mainstream and their parent culture saying that they are animists and hence not part of the Hindu society. In the Constitutional Assembly, when the term ‘Aboriginals’ came up for discussion, Dr. Ambedkar, who vehemently opposed the term, instead suggested the term ‘Scheduled Tribe,’ which was finally accepted. In 2006, during the discussions held at the United Nations on the proposed Declaration on the rights of indigenous people, the Indian delegation, participating in the deliberations, had made it unequivocally clear that all people in Bharat are indigenous.

So, the need of the hour is for us to think of the common subject, the common objective, which would inspire people to rise above narrow-mindedness, differences and hatred, by inculcating a sense of oneness and the feeling of fraternity among them, based on Dharma, to make our nation foremost in the comity of nations. According to Mahatma Gandhiji, “Politics devoid of Dharma would be reduced to no more than a garbage bin.” But, alas, for us Dharma is ‘communal!’ Why? For us, because of our ignorance, Dharma is identical or synonymous with religion, which it is not. Dharma is a concept unique to Bharat and the Westerners, whom we even now treat as our real masters and mentors, out of their sheer ignorance, said both religion and Dharma are the same, and for us, because of our slavish mentality, nothing more was needed to dub Dharma as communal and fling it away. To identify Dharma with religion is nothing short of comparing cheese with chalk! Dharma is something that unifies the society. A political ideology cannot unite the world. Communism came on the world scene with the assurance of bringing the whole world under its canopy, and by the first half of the last century it could bring almost half of the world under its yoke. But now communism has become a dirty word with no takers and is finding itself in the most unenviable plight like the frog on a dissection table.

In the New Testament, Jesus the Christ says: “My kingdom is not of this world: if my kingdom were of this world, then would my servants fight, that I should not be delivered to the Jews: but now is my kingdom not from hence” (The Holy Bible, King John Version: John: 18- 36). However, in Europe, with the downfall of the Roman Empire, and due to the circumstances then prevailing, the people, being Christian, came to accept the ecclesiastical power to oversee and control even their “this-worldly” affairs, and this power became absolute.

It was Machiavelli, the Italian political philosopher, who in 1520 proposed in his book, ‘The Prince,’ that political administration should be the exclusive domain of the political authority and the Church should not interfere with such matters. And, inspired by his thought, during the French revolution of 1789, the people there fought not only the despotic king but also against the pope. Thereafter, England, France and Germany became ‘secular’ states, bringing the papal authority to an end. This, in short, is the sequence through which ‘secularism’ came to gain ascendency in Europe.

Religion also cannot unify the society. Christianity and Islam tried to bring the whole of humanity within their own fold, by establishing the Kingdom of the God or Allah. But they could not bring even the people belonging to different denominations following their respective religions under one umbrella. However, Dharma is not sectarian, but universal and, hence, the Mahanarayanopanishad says: “Dharmo vishvasya jagatah pratishta”- Dharma is what supports the whole world (Section 79, Mantra 7).

The meaning of the word Dharma is given as under in the English dictionary:

a. The principle or law that orders the universe.

b. Individual conduct in conformity with this principle.

c. The essential function or nature of a thing.

And in the Srimad Bhagavat Gita Bhagawan Sri Krishna says:

(Ye Arjuna, whenever Dharma is on the decline and Adharma is in the ascendant, then I manifest myself). Here, the Lord’s words unequivocally lay stress on the importance of Dharma in sustaining the society as a homogeneous whole.

Dr Ambedkar’s following words are very relevant here, and I would like conclude with his quotation: “Positively, my social philosophy may be said to be enshrined in three words: liberty, equality and fraternity. Let no one however say that I have borrowed my philosophy from the French Revolution. I have not. My philosophy has roots in religion and not in political science… In Buddha’s philosophy, Liberty and equality had a place; but he added that unlimited liberty destroyed equality and absolute equality left no room for liberty. He gave the highest place to fraternity as the only real safeguard against the denial of liberty or equality. Fraternity was another name for brotherhood of humanity, which was again, another name for Dharma. Only brotherhood can protect freedom and equality. This brotherhood is also called social oneness. It is humanity, it is Dharma.”