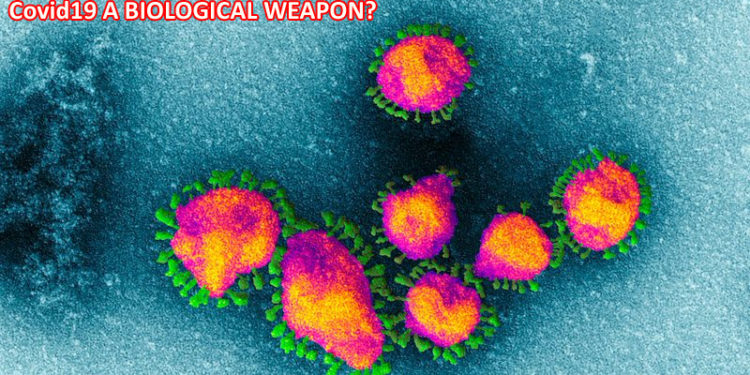 Global markets are falling and there is anxiety lurking in the minds of millions, around the world, wondering where will the slow but steady spread of coronavirus lead the world to. A Professor of molecular biology in New Delhi’s Jawaharlal Nehru University, Anand Ranganathan, and his colleagues published a preprint (which has not been peer-reviewed, as yet) about their research on the novel coronavirus (2019-nCoV) from China. A possible link between it and other similar known coronaviruses circulating in animals (such as bats and snakes) has been found, and disturbingly found HIV virus-like insertions in 2019-nCoV. No other well-studied coronaviruses have such a structure. Hence, their research hints at the possibility that the virus was designed and could be used to wage biological warfare. China’s National Health Commission has reported 31,161 confirmed cases of coronavirus. And on 7 February, there were 31,452 individuals infected with 2019-nCoV worldwide, and 638 had succumbed to the disease. This is, indeed, very alarming.

Against the background of these recent developments, it seems apt to suggest that a fierce, take-no-prisoners type of trade war is currently going on between the United States and China. And in the midst of this confrontation, as if by a wave of a magic wand, a coronavirus outbreak started in the PRC, which has already caused enormous damage to the Chinese economy and has considerably weakened Beijing’s bargaining position at the negotiating table.

Bloomberg reported that Chinese stocks plummeted when markets reopened and called these developments “the worst rout since 2015.” For ten days China’s and Hong Kong’s financial markets had been closed on account of the Lunar New Year holiday celebrations nation-wide. And the more than 8% fall in key stock indices has been linked to the coronavirus outbreak.

Telecommunication, technology and extractive companies are the worst hit.  Crude oil, iron ore and ferrous metal futures fell by 7%, 6.5 % and 6 % respectively. Copper, and crude and palm oil also sank by the maximum daily limit allowed on the Chinese markets. Fang Rui, the Managing Director at Shanghai Wu Sheng Investment Management Partnership, said: “A lot of people in the market have not been through situations like today, and you can’t blame people for wanting cash when they feel like their health is at risk.”

Even before the coronavirus outbreak, many experts reported that, recently, Washington, in contravention of international law, was actively developing biological weapons in its numerous laboratories located in the United States as well as overseas. Last November the Secretary of the Security Council of Russia Nikolai Patrushev, who is well-versed on the topic, sounded the alarm about this and described key threats to security of many nations around the world.

One section of his article addressed policies “aimed at the destruction of the unified humanitarian space” and at sowing division within the CIS (the Commonwealth of Independent States) and the CSTO (the Collective Security Treaty Organization), and also referred to the establishment of laboratories by the United States in CIS countries. “Of particular concern are the Pentagon’s activities aimed at creating biological laboratories across the globe, first of all in CIS countries, which study infectious diseases and can be used to develop biological weapons,” Nikolai Patrushev wrote. Later on, there were reports that more than 200 U.S. biological laboratories began operations worldwide. And some are situated in Azerbaijan, Armenia, Georgia, Kazakhstan, Moldova, Uzbekistan and Ukraine.

Igor Nikulin, a former advisor to the United Nations commission on chemical and biological weapons, with regard to the Indian scientists work commented that China’s medical staff had started treating individuals infected with the novel coronavirus with HIV medicines with some success. In his interview with newspaper Moskovskij Komsomolets, he said that 2019-nCoV was a weaponized version of the coronavirus, and that there was not a shred of doubt it had been designed for a specific purpose. As scientists are working on a vaccine against this novel virus, medical workers remind the public that the same means for treating the flu should be used to fight this disease.

The troubling question is who benefits from the fact that yet another epidemic has put a powerful nation such as China off its economic growth. Notably, 2019-nCoV has even “got to” U.S. tech giant Apple since its production facilities are located just 500 km away from the “epicenter” of the coronavirus, the city of Wuhan. And now, according to the Nikkei Asian, production of popular iPhones could be halted. The Starbucks Corporation has also ended up in a difficult situation. On account of the quarantine, it was forced to close more than half of its 4,000 cafes operating in China (incidentally, the PRC is the second biggest market for the company after the United States).

There seems to be some underlying troubling thought if one recounts the earlier advice of President Trump, at the beginning of the stand-off between USA and PRC, that the US companies should move out of China. Could it be that both Apple and Starbucks got truly unlucky not to have listened to the President’s advice? If the President’s and the Administration’s motive has been to bring the Chinese upstart to its knees, means other than trade/commerce, are always tempting to try.

The troubling thought of late Richard Nixon’s war against the Viet Cong, more than half a century ago comes to mind, when for the first time the United States used biological and chemical weapons. During the Vietnam War, the U.S. military spread about 72 million liters of herbicide Agent Orange (to remove foliage), including 44 million liters of this defoliant contaminated with 2,3,7,8-tetrachlorodibenzo-p-dioxin (TCDD) over South Vietnam. TCDD is a persistent organic pollutant that, on entering a human body with water or food, causes various diseases of the liver and blood, birth defects and problems during pregnancy. After American troops had used the herbicide, tens of thousands died after the war. Altogether, approximately 4.8 million Vietnamese were affected by the spread of the chemical, including 3 million direct victims of the defoliant.

The current coronavirus outbreak and the media hype associated with it have already caused enormous damage not only to the economy of China but that of many other nations of the world. Flights have been cancelled, production halted, logistics disrupted and fairs have lacked attendees.  Even international scientific events have found shifting of venues. This author, who was invited to Beijing to deliver a keynote address in an international conference related to plant nutrition found the venue shifted to Amsterdam.   The epidemic in the PRC has forced more and more large companies to change their plans and improvise. The sudden decrease in air traffic to and from China and the rest of the world has not only reduced revenues of airlines and airports (affected by fewer passengers and flights) but also caused serious problems for companies from various spheres.

President of the World Bank Group David Malpass has said as much, and also alerted the public to the fact that the global economy was “poised to decelerate more than previously estimated” at least in the first half of 2020. He also reminded that many Chinese goods were transported to destinations worldwide via passenger planes, which is why, at present, companies are forced to quickly adjust their logistics routes based on current conditions.

In Europe, Germany, which initiated an “open door policy” to China, starting way back in 1980, has been most affected. Lufthansa cancels all of its flights to the PRC, the German travel industry loses its Chinese clients and German companies halt production in China. Due to the outbreak, businesses start to sustain losses. Mostly fairly well-off Chinese visitors go to Germany, and based on the total amount of money they spend on travel and stay in this country, citizens of the PRC take second place among other foreign nationals. According to German media sources, annually, the Chinese spend approximately 6 billion Euros on transport, accommodation, food and shopping in Germany.

Many tourist attractions in Germany will lack tourists from the PRC in the nearest future. Having pointed out the importance of visitors from China for Germany’s retail, travel and entertainment industries, Petra Hedorfer, the head of GNTB (the German National Tourism Board), expressed hope, in a special press release, that the situation would soon return to normal, and reminded the public that the peak season for Chinese tourists coming to Germany was summer. Hence, these sectors could potentially recoup their losses that will start to grow in the nearest future.