The brand new methods of Jihad 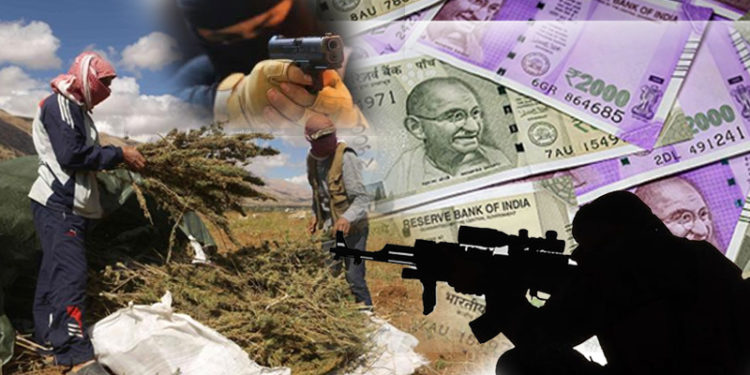 Since the world has become aware of ‘Love Jihad’, the jihadis have started experimenting with the brand new ‘Drug Jihad’ to destroy the economic stability of our country. In the year 2019 alone,  Customs in Kerala had seized four and a half kilograms of drugs, including hashish. Gold smuggling through the airport continues unabated. In 2019, 131 kg of gold worth Rs 48 crore was seized from Nedumbassery airport alone. In 2017, 82 kg of gold worth Rs 23.69 crore was smuggled through Kochi alone. In 2018, that figure rose to 167 kg of gold worth 52.46 crore. The birthplaces of terrorists arrested in connection with these smuggling will show the clear picture. Of the 68 arrested, 3 were foreigners. 14 were Tamils and 4 from Andhra Pradesh. The remaining 47 are Malayalees from North Kerala. North Kerala is a safe haven for the radical Muslims and the communists who are looking to appease them. This fact gives an insight on where and with whose blessings in South India these dangerous products from abroad under the supervision of foreigners are smuggled in.

The stumbled inquiries into the disappearance of counterfeit currencies that were once loaded into the container should also be read in conjunction with this. The probe into allegations that the coastal regions are being bought by the rich gulf-men has suddenly stopped.

The smuggling of deadly weapons are in addition to this. No one has forgotten the incident of seizing six airguns from a Palakkad native recently. Two Muslim militants who fled the scene after shooting  a police officer named Vincent at Kaliyikkavila were trained to use guns. It shows how dangerous the availability and use of deadly weapons is in the country. There are press reports in Kerala that fake guns are four times more in use than that of licensed guns. It says that crews who are trained in making guns are producing highly powered firearms. It is reported that they are also producing double barreled guns that can be fired accurately into a target at a distance of 600 meters. The report also states  in terrorist cells training is carried out with these firearms. (Janmabhumi 14-01-2020. Page 11.) Fake bullets were also found during the NIA raid in Kannur.

The SI, Raghu Balaji, has testified that SI Vincent was killed with a pistol. The 7.2mm ammunition bullet used in the 9mm pistol, which was obtained from the scene, also testifies to this fact. Police also suspect that the guns were silencer fitted.

Given these facts, the treacherous and degrading acts by Ramesh Chennithala, Yachuri, Manisankar Iyer or  protesters, should be regulated . The blindfolded media and the irresponsible fabrications of politicians are putting the country at risk. It is too late for them to realize the fact that the land is in danger.