Irfan Habib and some historical facts 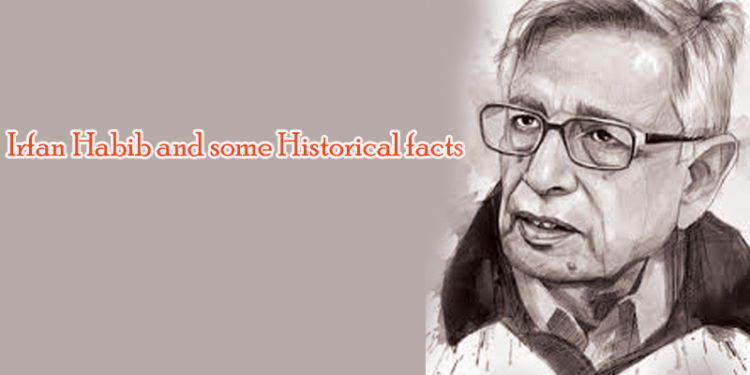 The famous historian & Professor Irfan Habib is an easy-to-find example for those who are interested in how Islamic fundamentalism and leftism coexist in academia. That coexistence echoed again as the ‘intolerance of the historian’  at the 80th Historical Congress hosted by the University of Kannur.

Prof. Irfan Habib can be seen as the 70th witness in the list of historians given by Sunni Waqf board in the Ayodhya case. He was the advisor to the Babri Masjid Action Committee and was a key speaker in the meeting of farmers union under CPI (M). When the effort of a historian who translated Tariq-E-Akbari was snitched and published after his death by the famous left historian Dr. Tasnim Ahmed, it was the same Irfan Habib who praised him by saying that he had done it admirably and it has credible accuracy and critical appraisal.  By becoming many times the Chairman of Indian Council of Historical Research and snatching the Chairman position at regular intervals in Indian History Congress he has maintained the ‘remarkable’ position of left historian in history itself.

It was Arun Shourie the lead writer and senior journalist who exposed the shocking truth that left historians have made the Indian Historical Research Council the center of nepotism, financial malpractice and academic fraud. When ‘historical facts were brought out with authentic proofs  through his book ‘Eminent Historians, Their Technology, Their Line, Their Fraud’, the masks of left-leaning historians from Malayalee KN Panicker to Irfan Habib were untied.

When their fraudulence was revealed they tried to cover up their lies and stood up for their fraud by portraying Arun Shourie as an “RSS man”. When the Hon’ble Governor of Kerala Arif Mohammed Khan exposed the political aims of the Left historians in a scholarly and dignified manner at the inauguration of the History Congress held at Kannur, Irfan Habib and his colleagues have accused  “RSS  conspiracy” the same old replica. But Kannur witnessed the defeat of their previously used technique of misinterpreting things by well connected media networking. It was was more than they could bear when Arif Mohammed Khan himself exposed the  false allegations against CAA by Marxist-Moududi group. Irfan Habib and the group of leftist historians could not recognize that India was not an old India. They  accused that the Governor speaks politics;the Sarkaria commission forbids it, can someone in the constitutional position say that? etc. But they were all muted by  the direct interviews of Governor, Rajbhavan’s press notes and the facts shared on social media. The media and left publicity groups tried to create misunderstanding by shouting “Governor says politics” for a justification given  to a bill signed and made law by the Hon’ble President of India after both the houses of parliament accepted it with majority as per the Constitution. Governor spoke after the speech of CPM leader K K Ragesh who made provocative remarks. Naturally, the next speaker explains his position on the remarks made in previous speeches, which is part of the meeting etiquette.

In the present context it is quite natural since citizenship law is the most discussed thing in Kerala. It should be debated why left politicians and left historians do not have the willingness to accept discussions of both sides. Later the stage was filled with intense intolerance and hatred. The outrage of a few SFI and  Jamaat-e-Islami sympathizer students from Jamia Millia, JNU and Aligarh universities could be understood. But why did Irfan Habib hurry to the venue? Irfan Habeeb and his colleagues were carrying out the statute of party villages, promoting the politics of intolerance created by the communists on the soil of Kannur in the stage of Indian Historical Congress.

Intolerance gains momentum and zing by the alliance of communist and communal ideas. The historian Irfan Habeeb also cannot escape from it. They had intellectually lead the Babar-E-Masjid Action committee and had campaigned for them. These historians were not only the advisors of Babar E Masjid action committee but also the advocates of the committee in consultations. Arun Shourie is making clear through his book with proofs about the communal incliantion of historians including Irfan Habib.

Archaeologist K K Mohammed who was in the team of Ayodhya excavation in his book writes “When Irrfan Habib officially came out in support of the Babri group the last mask which was hanging on a weak cord that cannot be tied has been unmasked” . He writes: “Subsequent articles have created confusion among the people, questioning the reality of Ayodhya. Even the Muslim intellectuals who had begun to think in favor of reconciliation, were persuaded by these left historians and the media, including the Times of India, which gives priority to their articles. Unfortunately, this gave courage and validity to the Babri Masjid Action Committee. The Muslim public who were once ready to leave the mosque and resolve the issue, began to think oppositely and stood with the new decision not to leave the mosque. They were brainwashed by the communist historians. The combined effort of these two forces closed the threshold for reconciliation forever. Had it been reconciled, the Hindu-Muslim relationship would have reached a historic turning point and many of the problems that plague the country today could have been resolved. ” (Njan Enna Bharatheeyan, K K Mohammed 115,116, mathrubhumi publications)