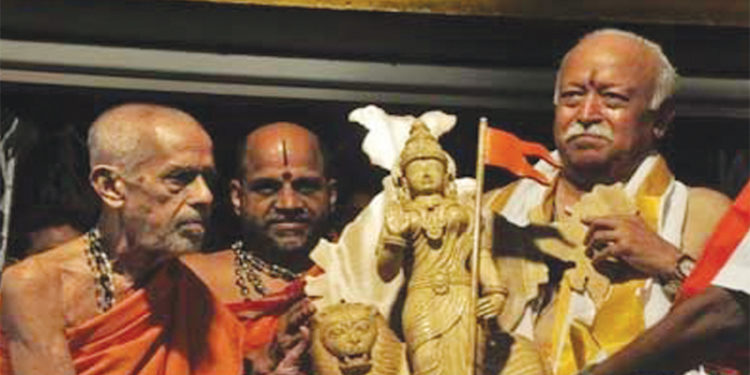 Vishwesha Tirtha Swamiji has been closely associated with the Rashtriya Swayamsevak Sangh and the Vishwa Hindu Parishad since its inception in 1964. For many years he was the national vice-president of Vishwa Hindu Parishad. Swamiji was instrumental in making the Ram Janmabhoomi movement a big success in Karnataka. He was part of the Goraksha movement, organized by the RSS and the VHP.

Swamiji, who had long been associated with the Ram Janmabhoomi movement, had said  that the Ayodhya problem would be solved in his lifetime. He expressed his desire to see the magnificent Shri Ram Temple, which was soon to rise in Ayodhya, as soon as the judgement was announced in favour of it .

Swamiji had a close relationship with all the Sarsanghachalaks since Guruji. Recently in Udupi, he met the present Sarsanghachalak Dr. Mohan Bhagwat and discussed the building of the Ram temple and the problems faced by the Hindu Society. Swamiji’s active leadership was also behind the elaborate Dharma Samsad in Udupi in 2017.