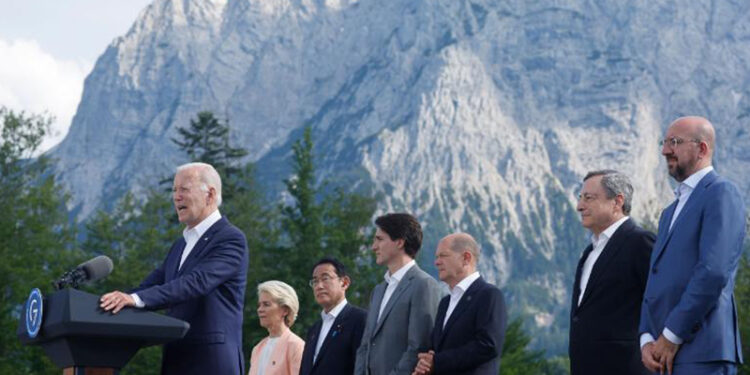 Scarred by reliance on Russian energy that has hampered several European nations from going all out to punish Russia, the just-concluded G7 summit was also warily looking at its systemic rival, China.  The summit in Germany was dominated by manoeuvers to tighten the noose around Vladimir Putin without leading to disastrous spillovers- a backlash among Western consumers, starvation in a rain grain-starved global South and a breakdown in the global order are imminent unless the West shows wisdom.

The summit devised a $600 billion plan for the developing world, as a counter to China’s Belt and Road Initiative (BRI). It is called the Partnership for Global Infrastructure and Investment (PGII) and is a relaunch of an unclear scheme unveiled at last year’s G7 meet in Britain.

The plan calls on G7 leaders to raise the fund over five years to launch infrastructure projects in middle and low-income countries. The U.S. has promised to raise $200bn of the total through grants, federal funds and private investment, while the EU has announced a further 300bn euros.

Unlike BRI, the one proposed by the G7 would provide funding largely from private investors. The G7 fund will focus on climate initiatives, among other projects, including a $2 billion solar farm investment in Angola, $320 million for hospital construction in the Ivory Coast, a vaccine manufacturing facility in Senegal, a 1,609 km submarine telecommunications cable connecting Singapore to France via Egypt and the Horn of Africa, and $40 million to promote regional energy trade in Southeast Asia.

Ban on Russian Gold and Cap on Oil

Ahead of the summit, London announced that the U.K., along with the U.S., Japan and Canada, would ban new imports of Russian gold to tighten the sanctions. The U.K. said that Russian gold exports reached around $15.5 billion in 2021 and that this figure has gone up since sanctions were imposed as a means of getting around them. Russia accounted for about five percent of all gold exports in 2020 and 90 percent of Russia’s output went to G7 countries — mostly to Britain.

The new sanction would have only a limited impact; similar to energy products, Russia could contain the damage by turning to emerging markets.

Twin caps on the price of Russian oil and pipeline gas to slash the Kremlin’s revenues also gathered support at the summit. The gas cap would operate simply by European countries refusing to pay above an as-yet-unspecified fixed price for Russian gas. But the idea of putting a cap on Russian oil would be unfeasible in reality, and these absurd measures reflect the unfathomable dilemma of the West.

Moreover, Germany is queasy about price caps. It fears a bust-up inside the EU over the proposal and that Putin may simply turn off the supplies of gas to Europe. A cut-off now would leave Europe struggling to build up the gas reserves it needs to survive a fraught winter. EU countries have been directed to fill their gas reserves to a minimum of 80% but they are well short of that.

The G7 is an informal forum bringing together the leaders of the world’s leading industrial nations – the U.S., the U.K., Canada, France, Germany, Italy, and Japan. It was formed in 1975, as the world suffered from the first oil shock and financial crisis. Canada joined in 1976 and Russia in 1998. Following the annexation of Crimea, Russia was suspended in March 2014.

Apart from India, other nations which got invited to the current summit were Argentina, Indonesia, Senegal, and South Africa.

At the summit, referring to the Ukraine war, which has pushed up energy prices across the globe, Indian Prime Minister Narendra Modi said that “energy access should not be the privilege of only the rich. A poor family also has the same rights on energy. And today, when energy costs are sky-high due to geopolitical tensions, it is more important to remember this.” Obviously, it was a dig at the West, and he was justifying India’s decision not to denounce Russia, and to buy discounted oil from Russia.

Modi has frustrated the West, also by imposing a ban on wheat exports. India will continue to buy oil from Russia, possibly with the Chinese Yuan as the reserve currency, in future. India’s top cement maker UltraTech did pay for Russian coal in Yuan, in June, for the first time, in history.

The summit was weakened by the fact that only 90 minutes were set aside to discuss food,  climate and health. Discussion of debt or the injection of new Special Drawing Rights funds, two cardinal issues of Africa, were ignored. A weariness exists in Africa about the G7’s failure to deliver on pledges made in G7 communiques. In 2015, G7 leaders pledged “to lift 500 million people in developing countries out of hunger and malnutrition by 2030”. But according to Oxfam, “In 2015, there were 630 million in hunger. As of 2021, this figure is thought to be 950 million.”

None of the visiting leaders was enthusiastic about the Ukraine war. The President of Senegal, Macky Sall, as chair of the Africa Union, has warned that the poorest countries are “caught between the hammer of war and the anvil of sanctions”.

Embittered by the food crisis, fissures have developed in the G7 camp. The vexatious parleys on reaching an agreement on safe passage for grain convoys, overseen by Turkey and the U.N., have lasted a month, and some countries are on the brink of penury.

The plan to ban imports of Russian gold trailed by the US and the U.K. does not yet have the full support of the EU.

The G7 fears the BRICS willingness to expand, and hence the G7 is unlikely to create a vacuum for China to fill by boycotting the upcoming November meeting of the G20.

Those who attended the G7 summit and the subsequent 2022 NATO summit in Spain tried to present a gait of bonhomie, though they are facing internal squabbles. Though officials from Germany and Britain were reported to push for temporary waivers on biofuels mandates to mitigate soaring food prices, Germany had to drop the idea during the summit due to resistance from the U. S. and Canada.

There is also a dispute over climate actions. A communique, released in May, said the G7 agreed to achieve “predominantly decarbonized electricity sectors” by 2035. However, the ministers failed to set a date for phasing out coal-powered energy due to objections from the U.S. and Japan. They continue to clash on coal.

The squabbles won’t end in Madrid for NATO, as Turkey’s concerns have added hindrance to Finland’s and Sweden’s pursuit of NATO membership.

Showcasing the PGII, the G7 blamed China for pushing the developing countries into a debt trap, through BRI. Hitting back, China has asserted that the days when global decisions were dictated by a “small group” of countries are long gone.

The Chinese foreign ministry has clarified that calling the BRI a debt trap is a false narrative. According to the World Bank forecast, if all BRI transport infrastructure projects are carried out, by 2030, the BRI will generate $1.6 trillion of revenues for the world each year, or 1.3% of global GDP. Up to 90% of the revenues will go to partner countries. The BRI could contribute to lifting 7.6 million people from extreme poverty and 32 million from moderate poverty from 2015 to 2030.