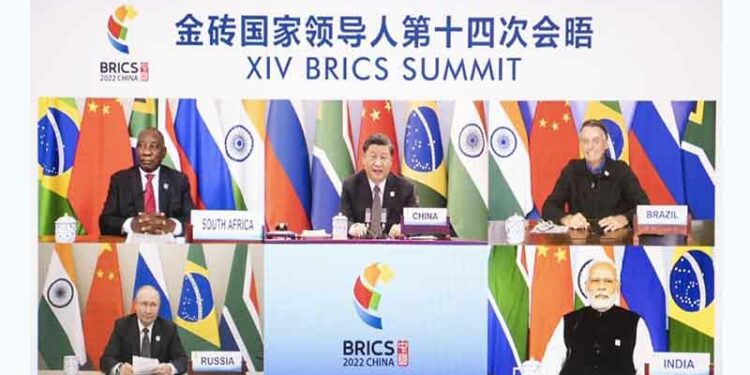 The 14th BRICS summit was hosted virtually by China amidst the turbulence in the international order, heightened by Russia’s presence in Ukraine and the hardening of Western positions, leading to the making of competitive plurilateral fora. This was the first BRICS summit after the Ukraine crisis and the Russian President Vladimir Putin was back on the world stage.

The summit covered intra-BRICS cooperation in areas such as counter-terrorism, trade, health, traditional medicine, environment, science and technology innovation, agriculture, technical/vocational education and training. This year’s agenda covered a range of topics, but the emphasis was given to renewing multilateralism for global economic recovery, deepening coordination on climate action, and strengthening coordination on pandemics and public health.

The summit was preceded by a virtual meeting of BRICS Plus foreign ministers on May 20 in which the ministers of Brazil, Russia, India, China, and South Africa (BRICS) were joined by representatives from Argentina, Egypt, Indonesia, Kazakhstan, Nigeria, the UAE, Saudi Arabia, Senegal, and Thailand. These invitees could be called the future members of the BRICS.

Established in 2006, BRICS graduated to a summit in 2009. Since India, Brazil, and South Africa (IBSA) summits were held alongside, South Africa became a logical member of BRICS in 2011.

At the time when BRICS was formed, its member countries were generally excluded from global economic institutions, especially Western. Right from its first communiqué, BRICS made it clear that existing international institutions were flawed, and it would offer its members a forum for leadership, cooperation, and information-sharing that had been denied to them.

China and Russia consider this an appropriate time to expand BRICS and challenge the domain of the G7 by including members from the G20. Any effort to disrupt the G20 may not bear fruits with Indonesia holding firm on inviting Russia.

China, backed by Russia, is hastening the process of expansion of BRICS as part of its strategic challenge to the US-led international order and to collect moderate powers around them. Hence, the 2022 theme,  “Foster High-quality BRICS Partnership, Usher in a New Era for Global Development” was not accidental.

The setting up of the New Development Bank or BRICS Bank was the first step in the expansion of BRICS.

Despite Western foreboding, BRICS implemented its 2012 decision at the Delhi summit to form new financial institutions, establishing the New Development Bank (NDB) and the Contingent Reserve Arrangement (CRA) in 2014. The NDB is the first bank founded by developing countries. It has established partnerships with other development banks, such as the Asian Infrastructure Investment Bank and the World Bank. It is trying to be more attractive to developing countries than Western banks. It lends in local currency, which protects the borrowing country from the stronger US dollar, and allows borrowing countries to set the standards for environmental and social compliance rather than having such standards imposed on them. The CRA, with a capital of more than $100 billion, is meant to help members withstand any short-term balance-of-payment pressures.

The NDB expanded membership in 2021, admitting Bangladesh, the UAE, Uruguay and Egypt. So far, the Bank has disbursed $30 billion in 80 projects in its member countries.  Of these projects, 21 are in India in sectors from transport, water and sanitation to clean energy, as well as digital and social infrastructure, involving $7.1 billion. The NDB has established an Indian Regional Office and just two days before the summit, DJ Pandian was appointed as director-general of the new office. Pandian previously served as Vice President and Chief Investment Officer at Asia Infrastructure Investment Bank.

In late May, Russian foreign minister Sergey Lavrov said that Saudi Arabia and Argentina are deeply interested in joining BRICS. The Ukraine crisis saw fissures emerging in the G20 and adding new members to BRICS could make it an alternative minus the US and its allies. This could also mean the BRICS overtaking G7 earlier than expected.

The first likely criteria in admitting new members will be to give priority to G20 members. Argentina, Indonesia and Saudi Arabia would qualify from there. For UAE and Egypt, their NDB membership is a qualifier. Kazakhstan was invited to the May 20 meeting as the largest country in Central Asia. Nigeria is an important African economy. Senegal is the current chair of the African Union. Thailand is the chair of the APEC and Indonesia, is the chair of the G20.

From the bloc of Mexico, Indonesia, Korea, Turkey and Australia (MIKTA), only Indonesia was invited. Russia and China would be happy to have Indonesia, Kazakhstan, Saudi Arabia, UAE and Argentina, but Egypt is a close ally of the US. Brazil would have to agree on Argentina. They are rivals in Latin America. South Africa has views on Nigeria and Egypt.

India is unlikely to oppose Indonesia as its relationship has been improving politically. India has an enhanced bonhomie with the UAE and Saudi Arabia. Russia and China will have to decide on Kazakhstan and other Central Asian countries. China may also back Iran and Malaysia.

India has shown great realism by refusing to denounce Putin over Ukraine because it knows on which side the oil tanker is anchored. Indian economy is not robust and New Delhi will remain engaged with China.

The five BRICS nations together represent 40 per cent of the global population, 24 per cent of  GDP and 16 per cent of global trade. China is the largest economy in the grouping, accounting for more than 70 per cent of the group’s collective $ 27.5 trillion economic might. Buffeted by the pandemic, none of the BRICS economies is predicted to expand except for China’s. Thus, India cannot afford to stay out.

India’s economy is suffering as it comes off the COVID-19 coupled with Ukraine aftershocks. It cannot jeopardise the lives of its population by refusing to buy discounted Russian oil and other energy products, that have been shunned by European countries following the sanctions. Moreover, Russian companies are accepting payments in Indian rupees and UAE dirhams. China is the largest importer of Russian energy and India is the largest importer of Russian defence equipment. While the Ukraine crisis has seen US allies reduce their Russian imports, China and India have increased theirs.

Predictably, the Indian Ambassador to China Pradeep Kumar Rawat met Chinese Foreign Minister Wang Yi a day ahead of the summit. This was Rawat’s first meeting with Wang after he took charge as India’s new envoy to Beijing in March. A Chinese Foreign Ministry statement quoted Wang as saying that China and India’s common interests far outweigh their differences, adding that the two sides should support rather than undermine each other, strengthen cooperation rather than guard against each other, and enhance mutual trust than be suspicious of each other. Wang had visited India in March during which he held talks with External Affairs Minister S Jaishankar and National Security Advisor Ajit Doval.

The summit would be interpreted by the West as the BRICS  endorsement of Putin’s doctrine. They have been unhappy with all BRICS members resisting the US-led campaign to denounce Russia and slap sanctions. China’s and India’s insistence on independence from the US-led order jells well with Russia’s anti-US stance.

BRICS continues to remain beneficial to its member states. Each country’s top leader attends the summit every year, and before G-20 summits and IMF and World Bank meetings, BRICS members hold preparatory sessions to discuss their stance.

BRICS helps China as a kind of diplomatic counteroffensive to both the revival of NATO and the increase in Indo-Pacific camouflages that are designed to keep its power in check. Through BRICS, China continues to draw on its tradition of ‘always siding with the third world,’ as Deng Xiaoping famously said.

But the challenge for Beijing is that there is a growing number of alternatives for the developing countries, whether it is the free and open Indo-Pacific Vision with emphasis on infrastructure connectivity, standard-setting, healthy infrastructure, tools for good governance, or alternative financings, such as Japan-led and EU-led infrastructure connectivity projects. China can surpass this competition by being more transparent about its agreements along the Belt and Road Initiative and through the Asian Development Bank.

To cap it all, China has surpassed the US to become the richest nation in the world as global wealth tripled over the past two decades, according to a  November 2021 report by the research arm of consultants McKinsey & Co. China’s wealth jumped to $120 trillion in 2020 from just $7 trillion in 2000. This marks a jump of $113 trillion in 20 years, helping the nation surpass the US in terms of net worth. During the same period, the US saw its net worth more than double to $90 trillion. However, the nation could not beat China due to muted increases in property prices.

Thus the broader geopolitics guarantees the flourishing of BRICS. India does not want to openly ally with the US against China, though the US has surpassed China to become India’s biggest trading partner. Russia is the trusted comrade of both India and  China. Brazil and South Africa have little to gain by turning away from BRICS.

The US strategy in containing China has focused on security, whether through the Quadrilateral Security Dialogue, NATO, or the AUKUS deal. But China is focused on an economic game through infrastructure, investment, and building close networks in many developing countries.

Hence it is not easy for the US to lead the liberal international order and check China’s quantum jump. The global order is no more a monolithic entity; it comprises several blocs of power that jockey for influence. This is the clear message of the BRICS summit.