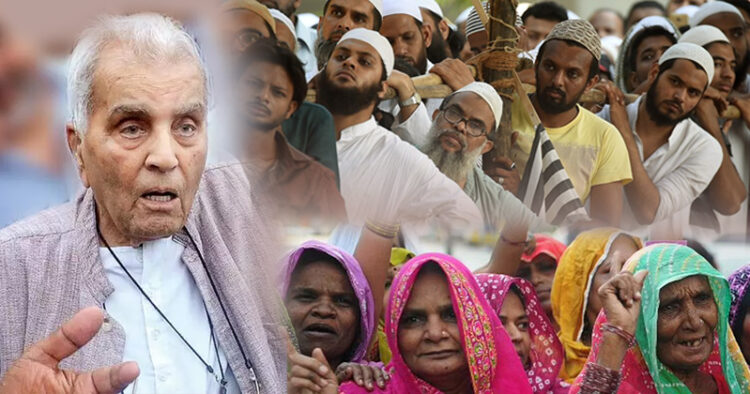 The Rajinder Sachar Commission report infringes on the rights of Hindus.

The March 2005 notification setting up the committee did not mention it was based on a Cabinet decision. It is clear that the then Prime Minister on his own whims issued the direction appointing the committee to inquire into the social, economic and educational status of the Muslim community, whereas, by virtue of Articles 14 and 15, no religious community can be treated separately.

The power to appoint a Commission to investigate the conditions of socially and educationally backward classes vests with the President under Article 340 of the Constitution. But PM Manmohan Singh appointed the commission.

The entire Muslim community has not been identified as a socially and educationally backward class.

The report made observations on the high birthrate in the Muslim community in comparison to Hindus: the committee estimated that the Muslim proportion will stabilize at between 17% and 21% of the Indian population by 2100. The Hindu population, in comparison, is showing a downward trend in states like Kerala that witnessed a Muslim upsurge like the Mappila rebellion that culminated in Hindu genocide and the formation of even a Muslim district called Malappuram.

In November 2013, the Gujarat government contended before the Supreme Court that the Rajinder Sachar Committee was “unconstitutional,” and that it only sought to help Muslims. It has strongly criticized the manner in which the PMO set up the Sachar Committee in 2005 to survey the socio-economic conditions of Muslims, while “ignoring” other religious minorities. This affidavit was filed in response to the Centre’s stand that the scheme was valid and that the Modi Government was to blame for the deteriorating condition of Muslims in Gujarat.

Seeking directions to restrain the Government of India from implementing the Sachar committee report of the year 2005 issued during Ex-Prime Minister Dr Manmohan Singh’s tenure, for initiating any scheme in favour of the Muslim community or for any other purpose, a petition has been filed recently (in 2021) before the Supreme Court.

The five petitioners, namely Neeraj Shankar Saxena, Manish Sharma, Umesh Rawat, Arun Kumar Singh, and Shishupal Bhagel, who are followers of Sanatan Vedic Dharm and belong to the Hindu community, have contended that for simply being Hindu, they are not entitled to avail the schemes initiated for the Muslim community and other religious minorities even though their income is much below than the limit of annual income earmarked for entitlement for religious minority communities.

Pleading for complete justice in the matter, the Apex Court has been moved stating,

“The Central Government has initiated beneficial schemes in favour of religious minorities notified under Section 2 of National Commission for Minority Act,1993 simply because they are religious minority irrespective of fact that such religious minorities have not been declared as socially and educationally backward class by any Commission constituted by President of India under Article 340 of the Constitution but the Central Government is taking shelter of the report of Sachar Committee to justify beneficial schemes initiated in favour of Muslim community.”

The petition further states that,

“The Petitioners and similarly situated persons of Hindu community are being discriminated on the basis of religion because of Sachar Committee report and their right conferred by Article 14, 15 and 27 of the Constitution of India are being taken away.”

The petition raises several arguments challenging the validity of the aforementioned notification. The petition reads as to how a separate commission to know the socially, economic and educational conditions of Muslims can be appointed which is not permissible under the secular and democratic setup of our constitution.

Validity of the notification

The petitioners have also challenged the validity of the notification issued from the office of Ex-Prime Minister Dr Manmohan Singh’s office that it nowhere mentions that same was being issued after any cabinet decision. Thus, it is clear that the then Prime Minister on his own whims issued the direction appointing the committee to enquire into the social, economic and educational status of the Muslim community whereas, by virtue of Articles 14 and 15 no religious community can be treated separately, the petition alleges.

The power to appoint a commission to investigate the conditions of socially and educationally backward classes vests with the President of India under Article 340 of the Constitution of India.

The Sachar committee ignored the ground realities of the society. The Committee has shown undue favor to the Muslim community.

Therefore, Hindus have been discriminated against unfairly under the pretext of upliftment of the minorities in the country.

In Kerala, the minority communities of Muslims and Christians demographically form a majority and they are not a weaker section. The population of the Hindus is dwindling. In such a society, the Sachar report is not applicable at all. Swami Shraddhananda, in his book, Hindu Samghatan, analyses the Census reports and shows that the Muslim population increasing in India, day by day. Hindus never allowed the widows to marry and there were lakhs of child widows due to child marriages among the Hindus. The widows were harassed and discriminated against, resulting in their conversion to Islam. Shraddhananda has shown that there was a 10% increase in the population of Muslims between 1881 when the first census happened and 1925.

If the Muslims are educationally and socially backward, it is because of the domination of the religious clerics in their society and Hindus are not responsible for it. The Muslims had ruled India for more than four centuries. Still, women have no role in the Muslim society and women are not allowed in their mosques. Their women are still behind veils or hijabs. For the development of the Muslim society, the domination of the Mollahs has to end and the Quran has to be rewritten deleting the absurdities contained in the text. The Muslims have to learn a lesson from the Christians- the Second Vatican Council had reviewed the Bible, and deleted the regressive portions, making it a modern text.