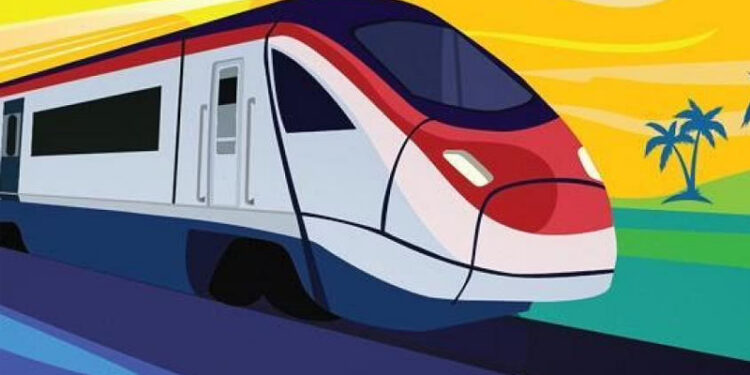 For days and weeks on end, the public imagination, in particular in Kerala, and the nation, in general, has been caught by the discussion on the “ambitious”, yet, controversial,  Silverline semi high speed rail project for Kerala, as a projected legacy of the rule of Pinarayi Vijayan, Chief Minister of the state, running his second term. While discussing the issues involved, one must keep in abeyance personal passions, because, there is both “yes” and “no”, on either side of the debate. Those with the “yes” verdict flaunting the “development” angle – in fact, the middle class of the state, embracing the “burgeois liberal” tendencies when it comes to futuristic needs,  in line with the thinking of the “development inclined” Modi government. Those with “no” verdict are the ones concerned by the fragile man to land ratio of the state, on which the project will have the most negative impact.  Kerala has 880 persons per square kilometre compared to the all India average of 382. In other words, in cities like Kozhikode, Kochi, Trivandrum  etc, people are living shoulder to shoulder, focusing the extreme pressure on land surface.  In the final analysis, the moot question would be, “Would the implementation of the Silverline Project be in the overall interests of the people of the State?”.  This piece would examine the issue in detail.

For a very objective assessment of the entire question concerning the feasibility/desirability of the project, one must start at the very basic question, and that is, the man-to-land ratio of Kerala. Kerala is a very thickly populated state. It is, in fact, a “land hungry” state.  And, by the government’s own admission 1, 221 ha of land would be acquired for the project. This is no small parcel, given the high man-to-land ratio. The most disturbing question would be the tracking of the railway line. Of the 529.45km that the rail corridor would cover, 393 km corridor, that is, 74,23% would be through Kuttanad district, the prime “rice bowl” or granary of Kerala State. Keralites are principally rice eaters. The state does not produce even 25% of its internal rice requirement, the rest being imported from neighbouring Andhra/Teleganga States or Punjab State. The fate of Kuttanad, which gets easily flooded during the monsoon, making paddy cultivation extremely difficult, will get further aggravated because of the embankments that the tracks would be covered with. This is because high concrete or masonry walls will have to be provided to prevent trespass of people and animals in the rail corridor. Fencing will not help as it can be violated easily. Providing solid walls on either side of the rail track will be a certain environmental disaster, as it will block natural drainage. This will have a huge adverse impact on rice production in the state because of flooding and submergence of Kuttanad paddy fields, and consequently adversely affecting the rice crop. Further, the concrete walls certainly will be an eye sore.

Further, about 800 rail over bridges or under bridges will have to be constructed, each costing in excess of 20 crores, totalling 16,000 crores, which will further inflate the total budget for the project at 63,940 crores. This will also entail additional land acquisition which has not been foreseen, nor talked about, apart from the 1,221 ha, as per the current admission of the government.

Rehabilitation of uprooted people: The rehabilitation of the thousands of families, who will have to give up their current residences, will throw up huge problems. Where is the land for that rehabilitation? How many new roads, bridges and other infrastructure are required to meet these needs?  Can the government ensure these? In fact, it may lead to a mini Narmada bachao andolan.

The ticket fare is provisionally put at Rs. 2.75/km. It does not say whether it is for business class passengers or standard class passengers. Assuming that this is the tentative fare/km, the cost of the ticket would come to Rs 1455.99 from Kasaragod to Trivandrum. As per current passenger movement, in north Malabar, most move between Kasaragod and Kozhikode, which takes totally 4.48hours. The Silverline might make it in just about an hour and a half. But the moot question is about the fare. Therein lies the rub. For this trip, the Silverline passenger would end up paying Rs 500.5 while a current AC class travel for the same distance would cost just about a third of this amount only. And the moot question is- will the saving in time match the excess fare that is paid? Hardly. In other words, the Silverline travel would be a very costly affair, and, no average Keralite can afford it.

Higher speed is equal to higher cost. The Silverline is expected to run at a speed of 200km/hour. The faster the speed, more capital intensive the project, less accessible the project for ordinary people.

Inevitable Debt Trap: The Kerala Government has made it known to the public that it would go in for the offer of a loan from Japan, interest free, because, the rail technology offered is from a Japanese firm. But, the moot point is Japanese inflation is surging, it rose from -0.4 last July 2021 to now +0.6 October 2021, and, the yen has appreciated by 182%.  This points to the inevitable fact that when the loan is paid after several years, the Kerala Government would end up paying an enormous sum of money to Japan, forfeiting the advantage of an “interest free” loan. In substance, the present government would be dragging the successor government to an inevitable debt trap.

Adverse Effect on Climate: During the last three successive years, Kerala has been facing abnormal monsoon, floods and unseasonal rains on account of climate change, caused by a plethora of factors like global warming, quarrying, unscientific construction of buildings on slopy lands etc. The installation of the Silverline rail track will further aggravate these problems, and, the project flies in the face of climate resilience.

The final word:  The government, in particular the Chief Minister, must very seriously introspect on the need for this rail corridor, which, finally, might end up as a white elephant, having inflicted irremediable ecological, environmental and financial damage to the tiny State of Kerala and its people. There is an unmistakable strain of stubbornness on the part of the Chief Minister in his utterances concerning the project. It would be a sad day for Kerala if, at the end, the Silverline project turns out to be the Achilles Heel for the Chief Minister

(The author is former Professor The National Science Foundation, The Royal Society, Belgium and can be reached at [email protected])