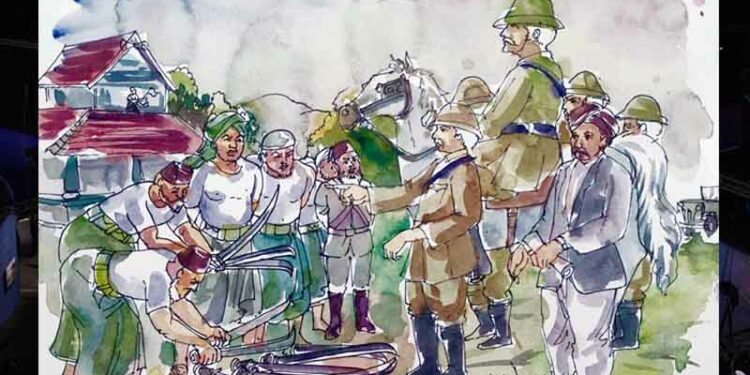 It was T.N. Godavarman Thirumulpad, of the erstwhile  Nilambur Kovilakam whose   initiative  turned out to be a historic  intervention by the Supreme Court to protect India’s forests. Nilambur  forms  part of Nilgiri biosphere reserve.  Seeing the destruction of forests  in Gudalur in the Nilgiris,   Godavarman Thirumulpad filed a writ petition in 1995  in the Supreme Court. A bench led by Chief Justice J.S. Verma passed an interim order  on December 12, 1996,    directing that tree-felling and non-forestry activity in forests across the country be stopped. States were directed to form expert committees to identify forests as defined and file reports. Senior Counsel Harish Salve was appointed Amicus Curie to assist the Supreme Court  (The Hindu July 5, 2016).

Godavarman Thirumulpad  belonged to  this  same Nilambur Kovilakam, where, a hundred years back in 1921,  succumbed to  one of the bloodiest massacres in contemporary history  marshaled by  a section of  Sunni Mappila fanatics in the name of Khilafat movement.

In late July I92I, in the village of Pukkottur in Eranad taluk, a dispute arose between the Nilambur Raja and a Mappilla,  who was active in the Khilafat  movement. Tension grew in the village, and on August 1, drums began to beat in the mosques of the area, and in the course of the day, more than two hundred  Mappillas, shouting war cries, gathered at Pukkottur branch of Nilambur Kovilakam. A large portion of them wore the Khilafat badge on their skullcaps, and the majority were armed with war knives, country swords, long spears, formidable bludgeons, and other weapons, including several guns. An outbreak was averted by the interference of Congress  leaders and police officials. But peace remained only for few weeks.

The first and major riot began in August  1921 at Pukkottur which lies adjacent to Nilambur timber zone at Eranad in  Malabar, accommodating the richest   timber plantations in the world.  C.Gopalan Nair, Deputy Collector of Malabar in his work The Mappila Rebellion 1921 (1923)  describes Eranad which  comprised Nilambur.  According to Nair “it is a tract made up of hills, clothed with forest, the eastern portion including the valley of Nilambur which produces teak and other timbers. There were disturbances in every amsom of the Taluk”.

On August 21, hundreds of  Mappilas armed with guns and swords assembled at Pukkottur on a false hearsay that,  the Thirurangady mosque has been destroyed . They marched towards Nilambur Kovilakam and on 21st  night murdered sixteen members of the royal family which included twelve males, two women and two children . It was not tenancy issues, but widespread rumours regarding destruction of Thirurangady mosque that led to the outbreak and carnage.

According to Marxist scholar Conrad Wood,  at Nilambur,  “Moplah resistance moved along customary ‘fanatical’ lines with mobs assembling in niskarapalli (praying ‘sheds’) then advancing on the Tirumulpad’s kovilagom (palace) to demand its conversion to a mosque, and the head of its principal inmate, indeed of  all kafirs… The emergent swaraj at Pukkotur was clearly Moplah raj”.

In 1880s, the Mappila elitists in Malabar, who got education, began to involve in local politics and established Himayathul Islam Sabha (also known as Mappila Sabha).This Sabha never raised Mappila tenancy and agrarian issues in Nilambur or other areas of  south Malabar, and made little efforts on the tenancy question in 1910 to invite public attention to Mappila grievances. Issues of tenancy and agriculture  were not confined to a particular religious group  to be raised  only through  the most brutal violence.

One of the most important Khilafat leaders was Variankunnath Kunjahammed Haji ‘belonging to a family with outbreak traditions’ as  described by K.Madhavan Nair, Congress secretary and president, in his classic work Malabar Kalaapam (Malabar Rebellion ). Kunjahammed Haji and   his  Sunni faction in  Ponnani headed by Mambram Thangal were sworn enemies of Kondotti Thangal in Eranad, whom they allege, belonged to the Shia section and kept away from riots.

Conrad Wood argues that Variankunnath Kunjahammed Haji  belonged to a  prosperous  family. According to Wood,  “ reports on the 1894 outbreak indicate that the family of rebel leader Kunjahammad Haji, a number of whose close relations were implicated in that outbreak, had been comparatively prosperous cultivators and therefore almost certainly kanamdars”( leaseholders ).

The arguments of Wood is substantiated by  Dr.Hussain Randathani,  Islamic historian and left fellow traveler . In  his paper titled  ‘Varian  Kunnath Kunhahammad Haji : Mappila  Freedom Fighter of Malabar’  Randathani describes him   as hailing from a rich family. Kunhahammad Haji    was   occupied with timber business, according to Randathani. During the riots of 1921 he made Nilambur his head quarters and ran a Khilafat regime. Why did Varian  Kunnath Kunhahammad Haji select Nilambur timber belt as his abode for Khilafat, when plains were available?  Randathani’s  recent work, Communists and Muslims is forwarded by Sitharam Yechury secretary of CPI (M).

President of Central Khilafat Committee, Mian Mohammad Haji  Jan Mohammad Muhammad Chotani   and his younger brother Mia Ahmed Chotani  had their business centres at  Lahore, Madras, Karachi, Calicut, Belgaum, Ernakulam, San Francisco and London. They established  an agency in Rangoon and ventured into the teak business, they were able to take advantage of the expanding teak trade, caused by the gradual opening of the Burmese forests after the 1830s  .  Their business  was especially due to the  boom in railway construction after the 1860s, which required   vast amounts of timber for railway sleepers.

Khan Bahadur Unnikkamu  timber tycoon at Mannarkkad  near Nilambur was the supplier of railway sleepers  that British required for the construction of railways throughout south India. By 1914, in  the Southern India Chamber of Commerce, 28 secretaries, directors, and members, 9 were Muslims,   while nineteen of the 80 resident members listed in 1915 were Muslims  (Report And Correspondence of the Southern India Chamber of Commerce: March 1914-February 1915).

That the Malabar riots were launched by  a section of rich Sunni Mappilas  against Hindus and also against  some Mappilas   who sheltered  Hindus is indisputable.  According to Conrad  Wood “any Moplah suspected of helping the government or even merely failing to respond to the rebel call for all Mussalmans, or “the Moplah brotherhood (udapurappa)”, to come to the aid of the Moplah cause was almost certain to suffer on falling into the hands of the insurgents. Most notorious was the murder by men of Kunhahamad Haji’s gang on 30 August 1921 of retired police inspector Khan Bahadur Kurimannil Valiyamannil Chekkutti Sahib who had   the temerity to harbour government servants and hindus at his residence at Anakkayam, as well as to display on his gate a directive of the authorities that all arms were to be surrendered”. Anakkayam lies twenty miles away from Nilambur.

Prominent timber merchants of Malabar  launched the Muslim league in Kerala.  In I969, in accordance to the demands of the Muslim League in Kerala and as a reward for its political support, the Communist government  of EMS Namboodiripad carved out the new Malappuram district  accommodating  major timber regions which included  the world famous Nilambur  teak zone.

Nilambur and Mannarkad were  core areas of  Mappila riots of 1921. The Silent Valley National Park and the Attappadi Reserve Forests are in Mannarkad. Silent Valley  constitutes the nucleus of the Nilgiri Biosphere Reserve, an integral part of the Western Ghats, and named a  a World Heritage Site by Unesco  in 2012.

Significantly, the largest encroachments are in Mannarkad (6,672.54 acres) and  Nilambur divisions (1,691),  where the Mappila  riots took place  and also at  Wayanad (4,297.14)  . Another curious fact is, encroachers have not taken the government to court for including them in list of encroachers.  More than three years after the High Court directed the state to recover encroached forest land, the Forest Department has managed to take into possession just 280 acres, or just about 1.5 per cent of the total encroached forest land of 19,277 acres ( Kerala: Only 1.5 per cent forest land reclaimed in Deccan Chronicle, Sept 25., 2017)

The extent of  forest encroachment was the highest in Eastern Circle with 3,819.75 hectares, as per the statistics compiled by the Department of Forests and Wildlife on March 31, 2016. The circle comprises Nilambur North, Nilambur South, Palakkad, Mannarkad, and Nenmara divisions falling under Malappuram and Palakkad districts (The Hindu, March 2, 2017).

Nilambur was also centre  of  forced religious conversions to Islam during the 1921  riots. A historic document  has been provided   by   K.P. Kesava Menon.  He  joined the Indian National Congress in 1915 and served as the secretary of the Malabar branch of the Home Rule League as well as the Congress.

Kesava Menon’s  notes and an interview published in The Hindu were recently retrieved from the archives of the newspaper (Focus on K.P. Kesava Menon’s accounts of Malabar rebellion in The Hindu, July 8, 2020).The Thiyya woman narrated to  Menon,  who was  secretary of the Kerala Provincial Congress Committee, that she and her children  were taken to Edavanna, where she was called Rabia twice and made to “repeat Kilema”.

The heads of the children of the woman, who wanted to  go back to Hinduism, were shaved by Mappila barber on the night they reached Kozhikkode  and “on the next day they were given Mappila skull caps.”She also narrated her misery on how  during  the 14 days of her stay  in the Pattanis house in Kozhikkode, she was compelled “to repeat Kilema” as reported in The Hindu.

In November 2019, CPM Kozhikode district secretary P Mohanan  remarked that Maoists in Kerala were being encouraged and nourished by extreme Muslim outfits . Marxist octogenarian and former Kerala Chief Minister, V.S. Achyuthanandan, stated in July 2010 that radical Muslim outfits wanted to turn the state into a Muslim-majority through their communal and divisive activities.

Nilambur has remained a hot bed  for Red Jihadi  alliance. The largest encounters against Maoists  take place in Nilambur forests. In 2013,  12 people from Nilambur in Malappuram went to Darul Hadees at Dammaj in Yemen, which Salafis refer as Lighthouse of Islam(The Times of India, July 12, 2016) The Deccan Chronicle (July 12, 2016)  reported  an  exclusive commune of self-proclaimed “true” Salafis, surrounded by teak woods and rubber plants,  near Nilambur forests, from where recent reports of men and women leaving for religiously terrorised havens in the Middle East have brought the commune  under scanner.

Why this issue has been left out and marginalized by  left and mainstream historians ?  Michael Christopher Low and others argue that the “processes of resistance to British imperialism are all too often handled by historians as part of discrete colonial, national, or regional histories, thereby occluding the interregional connections among various locales within  dar al-Islam. The importance of individuals involved in pan Islamic contacts during the period is  either neglected or kept aside by the left,  for interpreting events within an ideological frame work as in the case of Malabar rebellion”.

The Communist Distortion of Mappila Revolt