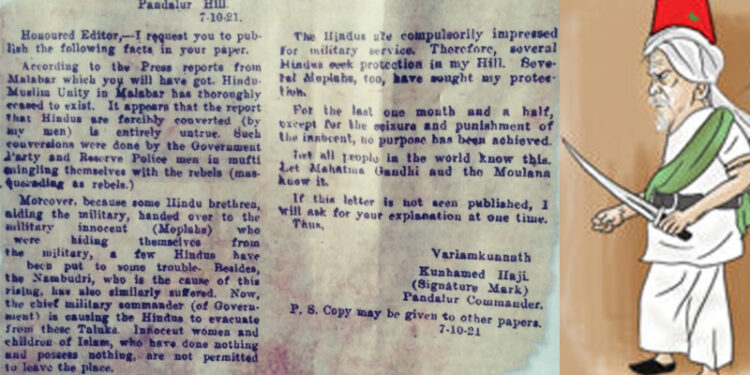 A letter, dated Pandalur Hill, 7/10/1921, believed to have been written by Mappila gangster Variyankunnath Kunjahammed Haji, published in the Hindu, while he was wandering in dense forests, from one shelter to the other, to save his life from the attacks of the British military, was reprinted  by the Daily, on June 26, 2020. The letter triggered controversy mainly, on the very authenticity of the letter itself. Ali Musaliyar, the unquestionable leader of the Mappila Jihad, anointed himself as the Calipha of the Islamic state on August 22, 1921, in a mosque, after getting victory in the direct fight with the British force and he established a mosque-centered mode of administration in his Caliphate. The Musaliyar raj did not last for  long, because, he was forced to surrender before the British army on  August 31, 1921. His relative Variyankunnath Kunjahammed Haji took over the reins of the Caliphate as the Amir of the Muslims, the king of the Hindus and Colonel of the Forces and he followed the Islamic mode of Sharia administration established by Musliyar. Though, the Jihadis of the Muslim force could overthrow the British rule at the initial stage of the war, the British military recaptured the reins of the Malabar region of the Madras province after the arrest of Variyankunnan on January 5, 1922 and he was shot dead by the British army on January 20, based on the verdict of the court martial.

Variyankunnath Kunjammad Haji, who, anointed himself as the commander in chief of the Mappila Jihad army, the supreme head of the Islamic court of justice, and the Caliph of the Islamic Caliphate of the Malabar region, after the arrest of Ali Musaliyar, named the Caliphate, Doula (not Malayala Rajyam) and ruled it strictly in accordance with the sharia laws. Hence there was forcible conversion of the non-Muslims to the Islamic faith, assassination of the non-Muslims who refused to embrace Islam, looting of the properties of the Hindus and raping of the Hindu women. The Hindu genocide and the other atrocities practiced by the Muslims against the Hindus were widely reported by the English and the vernacular newspapers including The Hindu and nobody, including the Marxist historians, has challenged the factual certainty of the reports. It was in this context that the said letter was shot into the letter box of The Hindu with a command to get it published not only in The Hindu but in other newspapers also. The writer of the letter threatened The Hindu, to face dare consequences if they fail to publish the same. The Hindu promptly published the letter.

The author of the letter denied all the facts reported by the press on the Malabar Jihad as falsely fabricated stories to tarnish the image of the Khilafat movement. The content of the letter can be summarized as follows:

(1) The allegation that ‘the Hindu-Muslim unity has thoroughly ceased to exist’ was a cooked-up story of the interested groups with the malicious intention to destroy the existing harmony of the two communities.

(2) The allegation that ’ the Hindus are forcibly converted by (my men) is entirely untrue’.

(3) Even if some conversions were done, they must have been done by the government party and the police men in disguise.

(4) If, some Hindu brethren had faced some troubles then, it was because of their fault as they helped the British military. The innocent Muslims suffered a lot for the misdeeds of the Hindus.

(5) The British government discriminately protected the Hindus denying the basic rights to the Muslims. 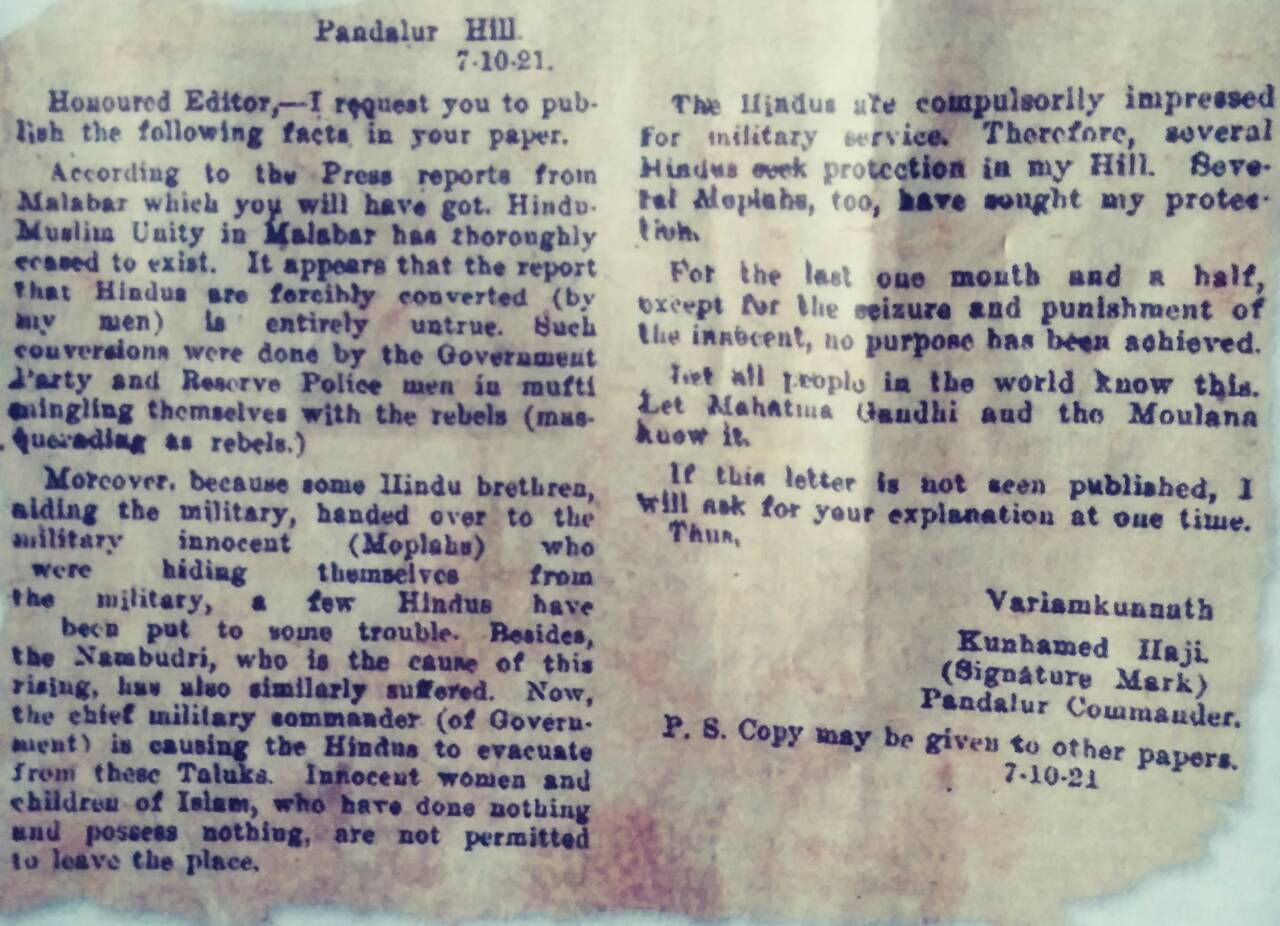 Incidentally, S. Kasthuri Ranga Iyengar, the Editor and proprietor of The Hindu, had presided over the conference of the Malabar congress at Manjeri, in April 1920 which, resolved to dissociate with the British if, they fail to admit the demands of the Khilafat movement. Annie Besant, Manjeri Ramaiyer, K Madhavan Nair, M P Narayana Menon and others had participated in the conference which passed the resolution not to co-operate with the British government if they fail to accept the demands of Khilafat movement, ignoring the dissent of Annie Besant and others who were known as the moderates. Madhavan Nair and Menon had secured majority, by bringing a crowd of Mappilas from Eranad, to the conference. This shows the fact that The Hindu could have verified the authenticity of the letter because Kasturr Ranga Iyengar had sufficient contacts with the local congress men including the hard core Mappila leaders. He also had, Yakub Hassan, in Madras. It was necessary to get ascertained whether the letter was written by Vaiyankunnan or someone else for him with or without the consent of Variyankunnan to fulfill the basic principles of journalism prevalent at that time. As, Variyankunnan was an illiterate, someone else might have written the letter. Since the letter was written by someone else for Variyankunnan then, the letter should have been published only after ascertaining the proper authenticity of the content of the letter and the identity of the person who wrote the letter. The authenticity of the content could have been attested only by the Variyankunnan himself. Unfortunately, it was not logically and practically possible to get the attestation of the content of the letter from Variyankunnan because he and his followers were hiding themselves in dense forest and they could not have revealed themselves to witness before the press at the risk of their life.

Therefore, the letter published by The Hindu enjoys only hypothetical value. A hypothesis needs proof based on facts. The facts presented to support the validity of the hypothesis should have been inter subjectively corroborated by logical reasoning. But The Hindu has never said anything regarding the truth-value status of the letter till date. It is unfair to publish materials that contradict the factual basis of the reports they themselves published in their newspaper without having proper proof. It is a well-settled norm in journalism that the publication of a letter written by an unidentified person containing unauthenticated and arbitrary claims is unethical. Nobody can even imagine that The Hindu was unaware of the ethics of journalism. Then the question arises is why did The Hindu published such a fake letter violating the basic ethical norms of journalism. The public deserves an answer from them, at least, during the centenary year of the Khilafat movement. If, The Hindu refuse to reveal the secrecy of the letter, the only possibility left before the public is to believe that the letter was either a forged document or part of a fake attempt.