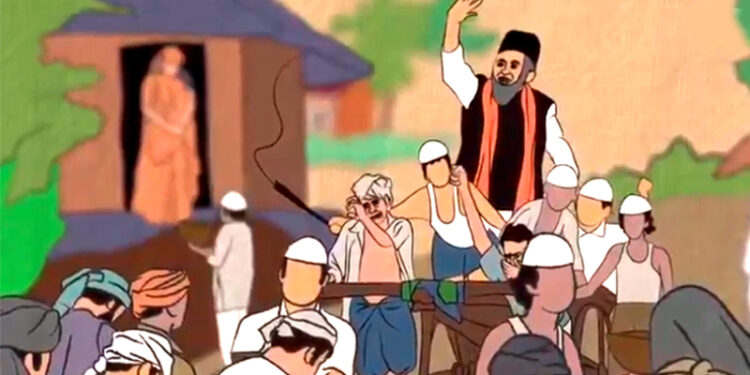 The Khilafath movement happened during 1921 in Malabar is known as Mappila Riots alias Malabar Riots. This riot is termed as a freedom movement as well as a riot of peasents against landlords. The so called historians are not able to reach a consensus on the core reason of the riots

In fact Mappila riots cant be Malabar riots. The said riot was not widespread even throughout the Malabar region of Kerala, if so it can partially agreeable. Its not fully correct to term as mappila riot also because whole Mappila community was not involved in the incident. The riots taken place fully in Eranad, Valluvanad Taluks and Kozhikkode and Ponnani taluks partially. In this four Taluks, there were 6,88,731 Mappilas at that time. Among that, no of grown up male was 74281. No of those who surrendered and arrested were less than 50000. It means that only one fourth from even muslim community have participated in the riots. That’s why its doubtfull to term as mappila riots.

In some documents, rioters are termed as terrorists. Its not wrong to termed them as terrorists because of the unmatched cruelties happened during the riots. It can be termed as uncontrolled anarchy of terrorists. I hope the details of the riots already discussed in the previous sessions.

Now we look into the details of the losses to the peasants and landlords during the riots. The first terrorist attack on Malabar is considered is the military invasion of Tipu Sultan. Hindus faced three types of losses in that time. First was loss of lives. Those who not agreed to convert into Islam have massacred brutally. In this way, Tipu has converted thousands of families. Lot of temples looted and destroyed and then converted to Masjids. Hindus in Malabar ran away to jungles and other places during the invasion. All these incidents are well documented in the writings of Tipu. If Tipu was not killed by British, he would have been convert entire Kerala to an Islamic state at that time itself.

The land acquired from Hindus by force were distributed to Muslims. It was helpful to Tipu that most of the landlords have ran away to acquire the lands. The real owners were returned back after Tippu was killed by British. They taken back their lands from Muslims. This is the core reason of communal friction between Hindus and Muslims in Malabar. Those who got lands through Tipu was forced to give back and became peasants.

The Mappila peasants taken this to account as threat to Islam. They started to break the contracts with landlords. To overcome this, the landlords made new contracts while on going contracts of lands exist. They lived in highly aristocratic manner also.

Some landlord approached judiciary to take back the lands from peasants. Mappilas were not the only peasants and there were Hindu peasants also broken contracts. Seventy per cent of the cases filed in Manchery court was against Hindu peasants. But only Mappila peasants were turned against them due to nothing but they lost their acquired lands.

Islamic religious leadership also given whole hearted support to Mappilas and this was add oil in the fire. This was turned into violence against Hindus including scheduled casts and other backward communities. There were 51 riots recorded during the periode of 1936 to 1919 in Eranad –Valluvanad area. Hundreds of Hindus massacered and temples destroyed at this time. Many Mappilas who involved in crimes shot dead by police and many were beaten up to death by public.

So, the minor riots in the periode 1836 to 1919 and the major riot in 1921 can ce considered as the aftereffects of invasion of Tippu in Malabar. The three member official commission by government in their report clearly says about the gravity and deapth of losses and sufferings faced by Hindus in the riots.

These religious fanatic rioters never taken the land of Landlords or peasants but they attacked the pride, life and culture of Hindus and thousands of people lost their homes.

Whole these losses were irrespective of landlords or peasants. It was a real genocide with thaqbeer. Each family lost their livelihoods, life and the houses set fire. So, no need of a second thought to infer that this was not a farmer agitation but Hindu genocide.

None of the rioters were peasants. As per the records of Wagon tragedy, all those killed were in the category of barber, merchants, carpenter and so on.  Many of the landlords were safeguarded by their mappila peasants. It’s a pertinent question that why mappila peasants sageguard their landlords if it’s a peasant movement. The mighty Azhvancheri Mana has protected by Mappila peasants from Puthancoat kulamb. There are many such examples to show. It’s a fact that many landlords were killed and their traditional homes were looted and taken forcibly by Mappilas. All these were the terrorism and looting in the name of Islam.

Each Hindu home were made helpless by killing earning male members. Krishnan Nair and his handicapped wife were killed for denying converting to Islam. Absolutely there was no discrimination between poor or rich in this attitude of rioters. Their demand was so simple, either convert or die. 36 Hindus massacred by cutting the throat in the leadership of Mundanangadi Moidu at a well in Thuvvur. In the same time another team lead by Varian Kunnath Kunhahammad Haji has cut throats of many Hindus and discarded in well near Urakam hill. Even ladies and children were not spared from this heinous act. Shinkarath Govindan Nair, Kallingal Madhavi and her husband were few among those who killed in this well. Maninan Thodi Changaru was one among who saved the life by agreeing to convert to Islam. The massacres ask a tricky question that either convert or go to England and those who choose England got killed immediately. Like this, 96 people killed by cutting the throat at Nagalikkavu well. Only one person, Choman was escaped from the well. Like this , in so many wells were filled with headless bodies of Hindus in Malabar.

Embryo of a seven month pregnant lady who killed was seen came out of the abdomen. Another six month old chiled was cut into two pieces after snatched from his mother’s hands. At Melattoor, one Nair lady was stripped off in front of her husband and brother. They brutally beaten up when closed their eyes to see the heinous act and that lady gang raped in front of them. This is the way which rioters hurt the sentiments and taken away the reputation and self-respect of Hindus other than financial losses. Golden jewelleries, lakhs of cash from hundreds of houses were looted. Thousands of cattle of dairy farmers were killed for food. Many temples around hundred were burned to ash. If the riot were not supressed in three months, these brutal violence would have spread the entire Malabar region. Liberal loans were distributor to those who affected after the riots.

Now, 2021 is the centenary year of this dark history. Its not forgettable the atrocities happened even after a century because Jihadi extremists still exist very actively with their agenda ain in our society. The incidents following the CAA implementation can be considered as an evidence of this. Their plan was well conspired for decades since 1921. They are enjoying the privileges of minorities also. Still they live in the dream of a Caliphate. That was reason behind this state was leading the recruitment to IS. So, Hindus should take extreme care by learning from History for their very existence.

The Communist Distortion of Mappila Revolt