The Basic Scriptures of Hinduism 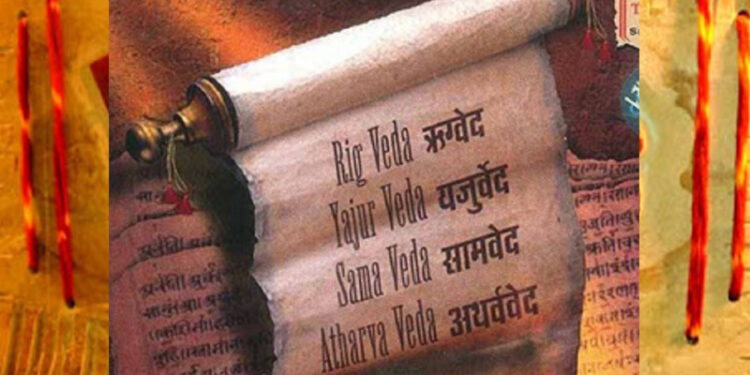 Hinduism is based primarily on the Vedas. ‘Veda’ literally means knowledge or wisdom. It is also called ‘Shruti’ which means ‘what is heard or revealed’. All other scriptures go under the omnibus term of ‘Smriti’ (‘what is remembered’). Shruti being divinely revealed to the great Rishis of yore in the depths of their mystical experience, its authority is supreme. Smritis are the secondary scriptures which derive their authority from the Shruti. Their business is to explain, elaborate and illustrate the fundamental teachings of the Shruti.

However, according to the Hindu view,revelations are not limited to any individual, time or place. Just as there have been revelations in the past, they can occur at present or in future also. The seer is only a medium to transmit to posterity the insight which he receives. Hence he is no more the inventor of the Veda than Newton is the generator of the law of gravity. The Vedas are four in number–the Rig Veda, the Yajur Veda, the Sáma Veda and the Atharva Veda. The Rig Veda is the most ancient scripture of the world. Lokamanya Tilak, on the strength of astronomical evidences, concludes that it is at least 8,000 years old.

The Rig Veda consists of hymns which are mostly prayers. The Yajur Veda deals mainly with sacrificial rites. The Sáma Veda contains a portion of the Rig Vedic hymns set to music. These have to be sung at appropriate stages during a sacrifice. The Atharva Veda, which is a later composition, consists mostly of morals and ethical codes as also a few worldly sciences.

Each Veda is usually divided into four parts:the Samhitas, the Bráhmanas, the Áranyakas andthe Upanishads. The Samhitas contain prayers and Mantras used in sacrifices. Whereas the Bráhmanas give the ‘know-how’ of sacrificial rites, Áranyakas teach the art of certain types of meditation, based mostly on well-known sacrifices. The Upanishads contain the highest philosophical flights of the Vedic sages which can be the pride of the whole human race for all time. Schopenhauer, the famous German savant, has declared: “In the whole world there is no study, except that of the originals, so beneficial and so elevating as that of the Upanishads. It has been the solace of my life, it will be the solace of my death.”

Then comes the Bhagavad Gita, the most popular of all the Hindu scriptures. The Gita, as it is shortly called is so well-known all over the world that it has been the second most-translated work. Though the Bible ranks first in this regard it should be remembered that its translations were sponsored by the mighty machinery of the Church with the enormous material resources at its command. As for the Gita, its beauty, sublimity and universality prompted its admirers to translate it into different languages of the world.

There is a verse in Sanskrit which compares the Upanishads to a milch-cow and the Gita to its milk. In other words, the Gita gives the essence of the Upanishadic philosophy in a simple and practicable form. It is an integral part of the Mahábhárata and is in the form of a dialogue between Sri Krishna, the great incarnation of God,and Arjuna, the great warrior prince. The battlefield was the place of its origination; and serious problems concerning life and death, duty and devotion, knowledge and meditation were discussed, and sensible solutions offered which hold good even to this day. Manliness and selfless devotion to duty are the keynotes of this great little scripture.

Any list of the Hindu scriptures is incomplete without the two great epics, the Rámáyana and the Mahábhárata. Though these two great books deal primarily with the story of Sri Ráma and that of the Kuru race respectively, they can more rightly be called the encyclopedia of Hindu religion and culture. These two popular works have influenced and inspired the Hindu  nation for thousands of years. They are technically called ‘Itihása’ (history) since they contain the history of the two most important dynasties that ruled and shaped the destinies of our motherland.

The Smritis of Manu, Yájðavalkya and Paráshara the Puránas including the famous Bhágavata, the Ágamas and the treatises on the Darshanas are the other scriptures forming the magnificent edifice of Hinduism built upon the foundation of the Vedas. The Smritis are mostly codes of law intended to regulate Hindu society from time to time, according to the principles of the Veda.

The Puránas are imaginative works woven round some historical matters. They aim at teaching religious truths through concrete examples. The Ágamas are sectarian scriptures dealing with the worship of a particular aspect of God and prescribing detailed courses of discipline for the worshipper. The Darshanas are schools of philosophy. The orthodox schools among them try to develop, systamatise and correlate the various parts of the Veda, each in its own way.