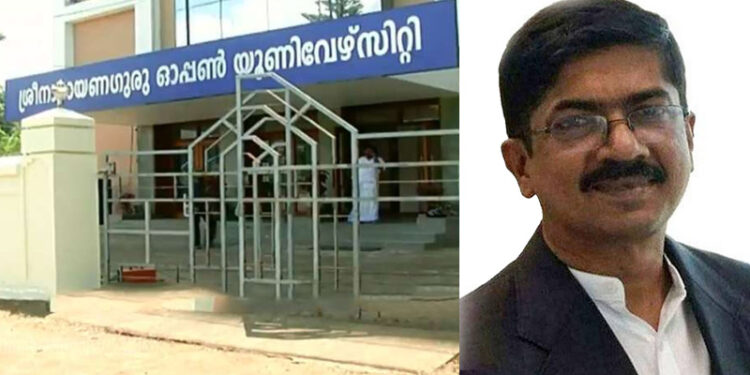 The recent cabinet decision to appoint Dr.Mubarak Pasha as the first Vice Chancellor of Sree Narayana Guru Open University  has spurred ire among the Hindu Ezhava community as well as the admirers of Sree Narayana Guru against the Leftist government of Kerala. BJP has raised this issue in the media and accused the appointment as an unlawful decision and without considering the UGC guidelines. This has been viewed as the left government’s continuing Muslim appeasement policies. It is accused that the decision has been taken as per the interests of  K T Jaleel who is in charge of the Higher Education Ministry.  It should be noted along with the mass appointments of Muslims in the different sections of Education Department. Jaleel is already facing serious allegations with respect to the Gold Smuggling Case and has been questioned by the central agencies.  There is criticism in social media that the left government is favoring the islamization of the state in all fields.

Vellappally Nateshan the Ezhava community leader and Sree Narayana Dharma Paripalana (SNDP) Yogam General Secretary, has criticized the left government for not considering for the post someone who is well versed with the ideology of the Sree Narayana Guru. He expressed his resentment over the State Higher Education Minister K.T. Jaleel for this decision. Interestingly Vellappally Nateshan had earlier supported Chief Minister Pinarayi Vijayan  in his Women’s Wall in favor of Sabarimala women entry . He now accuses the Pinarayi government that it has poked the eyes of the believers of Ezhava community and has stooped too low when the minorities mounted pressure on them.

Save University Campaign Committee, a collective of education activists and academics, has petitioned Governor Arif Mohammad Khan  to reconsider the appointments. It is petitioned that, Mubarak Pasha lacks the qualifications prescribed by the UGC . Pasha, who has not been designated as a professor while in service doesn’t have 10 years of teaching experience as professor that a VC should have . Pasha was said to be the principal of a private college before joining Calicut University as director of distance education. Later he joined a private institution in Oman. While the appointment is said to be a violation of UGC norms and Open University Ordinance, the left government sticks to the stand that its their sole prerogative and UGC norms were not applicable in this case.