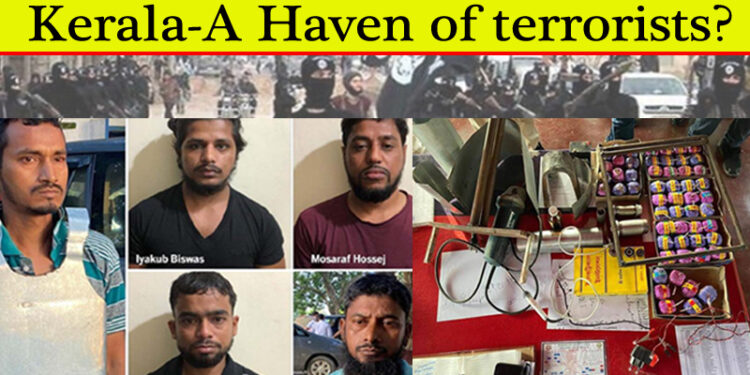 Kerala has once again topped in the news with the arrests of Murshid Hasan, Iyakub Biswas and Mosaraf Hosse, the three Pakistan-sponsored module of the Al-Qaeda terrorists  from Ernakulam by the National Investigation Agency. The prime accused in the Kanakamala IS case  who had escaped to Georgia was also arrested  by NIA and was produced before the court on the same day. The arrests are serious of its nature considering the growing outfits of terror groups in the state. Recently a report was announced in the parliament regarding the presence of Islamic State terrorists  mostly in the southern part of India with Kerala at the top of such activities. The Union Home Ministry informed the Rajya Sabha on Wednesday that the National Investigation Agency (NIA) has registered 17 cases related to the presence of Islamic State in southern States and arrested 122 accused persons. All these incidents happen while the Kerala gold smuggling and its link with terror groups are being investigated by the central agencies.

Along with the three al-qaeda terrorists from Ernakulam six terrorists were arrested from  Murshidabad in West Bengal also. Implicate materials including digital devices, documents,  literature related to Jihad, sharp weapons,  firearms,  body armour, articles and literature used for making home-made explosive devices etc have been seized from their possession. As per the reports these terrorists had planned to undertake attacks at multiple locations in the country including the National Capital Region.

Interestingly the terrorists were arrested from Kerala and West Bengal which are the two places where the leftists has considerable influence. In Kerala, the three terrorists were arrested from Pathalam industrial area and Perumbavoor. These places in Kerala have become a hub of interstate labourers for the past few years. There were serious reports and allegations that many of these people who live here as workers are from Bangladesh. BJP and some Hindu organizations had raised concerns about their activities. But the Left government and the State Home ministry controlled by Chief Minister Vijayan has not taken any serious steps against this. The minority vote appeasement politics by the left parties have cost a lot to the safety and security of people in Kerala. Meanwhile the state government is facing serious criticism and protests with regard to the gold smuggling case. Allegations regarding involvement of ministers and their family members has become the hot topic of news discussions in media for the past few months in Kerala. Also there are allegations that the terror groups have gained strong influences in the ministry itself. Anyways Kerala is transforming from god’s own country to gold’s own country and further terrorist’s own country.