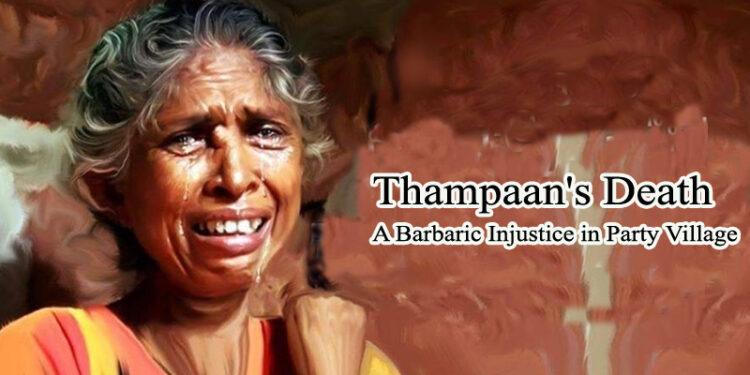 It is the tradition of Communist Party to judge and enforce crime and punishment.There are many instances where the one-sided judgments in party villages resulted in murders. Women’s Commission Chairperson MC Josephine has recently said the same without any doubt .Josephine maintains the standpoint that her party has its own court system and that the party is both a court and a police station.

Thampaan, aged sixty, from SC colony Olatt in Cheruvathur, Kasargod District of Kerala died three days after being mercilessly beaten at Kodakkad . This is a clear example of the barbarian law executed by the communist party in party villages. Investigation on the fault done by Thampaan shall reveal the reason for this  barbaric law executed by the party leaders.

On 26 May  Thampaan along with his brother-in-law’s son went to nearby shop to buy jaggery for pudding. While leaving from shop he was stopped on the way by Manoharan who is a teacher of Kodakkad Welfare U P School,a  former policeman of Cheemeni Police Station and CPM branch committee member. Thampaan was beaten by Manoharan asking why he bought jaggery. The beating continued even after Thampaan told that it was for pudding. Manoharan told the boy who accompanied Thampaan that they shall be allowed to go if they admit that the jaggery was for liquor distilling. The boy asked him that how is it possible to distill with one Kg Jaggery. Thampaan who got tired due to beating was taken home and for three days he was bedridden without food or water in his little thatched house. After three days he died while being taken to hospital. The poor man died with the unaccomplished wish to have pud with his family. This death due to the barbaric act of party person is similar to the death of Madhu in Attappadi.

The family of Thampan accuses that he was beaten to death. Thampaan became tired and bedridden since he was beaten  by Manoharan. Thampan who lives in SC colony of Olatt is a man who used to walk with heavy loads for kilometres. People say that such a person shall die of beating only if it was too heavy. But the communist party took a stand to save Manoharan who is party’s branch committee member. Party asked Balakrishnan the brother-in-law of Thampaan to withdraw from complaint in a meeting at nearby Community Hall on the next day of death. They were threatened that if the complaint is not withdrawn they wont be allowed to live in the colony. Then the locals came into the scene.  There has been strong protests in the party itself over protecting the man who has beaten Thampaan and caused his death.

The criminal side of Manoharan

Manoharan was a policeman at Cheemeni Police Station. Later he became a teacher at Kodakkad government welfare school. Manoharan is accused of assaulting some people earlier. He and his family have a financial relationship with the Thampan family. Manoharan and his brother Gangadharan who is Olatt Ward member took over about one and a half lakh rupees from Thampaan’s brother-in-law which he had obtained from Party’s  money lotto at Olatt colony. They havent given the money back. There is a case against it. Moreover, Sundaran another brother of Manoharan is an accused in a POCSO case in the family. There are complaints of assault in Human Rights Commision against Manoharan  who has criminal backgrounds.

Thampan started living in Olatt colony twenty years before after marrying Rajaputri of the same colony. Locals say that he was beaten up to create fear in this family. Thampan who doesnt own a house or ration card in CPM party village lived in a small house covered of sheet. The party has refused to give them a house or get a card. On the other hand they took over money from his brother-in-law.

The family complaints that Cheemeni police is not filing case on the complaint that Thampaan was beaten to death. Police says that a case has been filed for death as per CRPC 174. There are allegations that police is also  threatening the family and trying to cover up the case. Police threatened a few people who had involved in questioning the death of Thampaan. Cheemeni Circle Inspector Anilkumar has a stand to protect the accused.The locals allege that the party intervened and tried to correct the post-mortem report.

Various political and social organizations have come forward to demand justice for Thampaan’s family.The locals are preparing an agitation against the party action and the Cheemeni police who protects Manoharan.

A Few Rituals and Sacraments of Hinduism

Place of Rituals, Temples and Festivals in Hinduism