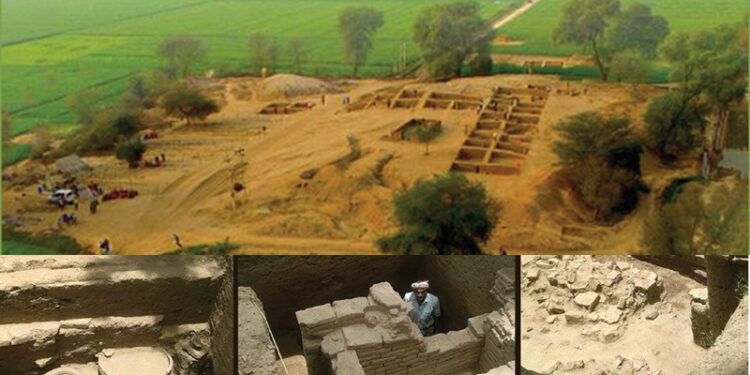 Clergymen may visit museums and ancient sites. But when they are accompanied by a lawyer-turned-politician, it raises curiosity. “On September 24, 2016, Father Jegath Gaspar Raj, founder of an organization called ‘Tamil Maiyam’ and who had organised Sangam 4,  a 10-day festival in August 2016 that focused on Madurai’s history, culture and tradition, visited Keezhadi along with Kanimozhi Mathi an advocate. Amarnath Ramakrishna took them around and showed them the trenches”. (Keezhadi treasures caught in a swirl, T.S. Subramanian, Frontline, Jan., 20, 2017)

Fr. Gaspar Raj, Kanimozhi Mathi and Keezhadi excavator K. Amarnath Ramakrishna charted out the program. Kanimozhi who is also coordinator of Gaspar Raj’s NGO, Tamil Maiyam, filed a public interest litigation (PIL) petition in the Madurai Bench of the Madras High Court with the prayer that the ASI should not be allowed to take the artefacts to Karnataka and that it should not be allowed to close the trenches dug at Keezhadi. In their interim order, the judges restrained the ASI from closing the trenches and shifting the artefacts to any place outside Sivaganga district.

Roman Catholic priest Fr. Jegath Gaspar Raj admitted that his association with DMK leader Kanimozhi dates back to more than a decade when he was a non-resident Indian and the DMK was not in power, and asserted that he would not break his ties with her (Tamil Maiyam unfairly targeted: Gaspar, The Hindu, Dec., 16, 2010). India Today reported that DMK patriarch Karunanidhi’s daughter has close ties with Fr. Gaspar Raj. “The controversial Catholic priest had always been under a cloud. Even before teaming up with Kanimozhi, he was accused of being a front for the LTTE’s financial operations. Worse, pro-Tiger websites accuse him of misappropriating LTTE money. With his LTTE connections, Gaspar Raj reportedly acquired skills for money laundering that indeed might have come in handy for the Raja-Rajathi-Kanimozhi trio” (Unmasking of a ‘literary heir’, India Today, Dec., 21, 2010).

Domestic Security and Intelligence analyst, Siobhan O’ Neil, in Terrorist Precursor Crimes: Issues and Options for Congress (2007) pointed out Gaspar Raj’s LTTE connections. Neil stated that Gaspar Raj Maria Paulian along with others such as Nachimuthu Socrates “have conspired to remove LTTE from US state department’s Foreign Terrorist Organization list”. Similar charges were made by James J. Tareco, Special Agent of FBI, against Gaspar Raj, Nachimuthu Socrates and others, in 2006, at the United States District Court, Eastern District of New York.

Nachimuthu Socrates, considered close to Gaspar Raj, was arrested on charges of arms dealing for a Sri Lankan separatist group, and bribe agents  (13 Tied to Sri Lankan Separatists Are Charged by U.S. With Aiding Terrorists, The New York Times, Aug., 22, 2006). On Sep. 9, 2013, senior Rajya Sabha MP, Dr. Subramanian Swamy, tweeted that, “FBI wants India to hand over Reverend Gaspar Raj, a LTTE agent in arms smuggling. But he is a friend of PC, BC and TDK. Hence protected”.

In 2010, the CBI raided Karunanidhi and his family in connection with the 2G scam. The media reported that, “the  biggest, most prominent raid in Chennai could very well be that of Father Jegath Gaspar Raj, a Catholic priest and the head of the NGO, Tamil Maiyam, on whose board both he and Kanimozhi officiate. A source said the CBI questioned Gaspar Raj on the source of the NGO’S funding and its income” (2G scam: CBI raids rattle Karuna family, India Today, Dec., 16, 2010).

The Madras High court on January 7, 2011, directed that no advertisement issued by the government for popularising ‘Chennai Sangamam’ should carry the name of NGO Tamil Maiyam, which was raided by CBI. Later, the High Court issued a contempt notice to Tamil Nadu Tourism Secretary for including the name of Tamil Maiyam in advertisements for a government-sponsored cultural event (HC contempt notice over Chennai Sangamam, The New Indian Express, Jan., 24, 2011).

Zealous efforts are on to make Pattanam a satellite site of Keezhadi. R. Sivanantham, deputy director, Tamil Nadu state department of archaeology, officially facilitated a lecture on Pattanam by its excavator, P.J. Cherian at Chennai. Cherian claimed that the excavated material from Pattanam and Keezhadi are similar and hence there is a brotherhood (Pattanam, Keezhadi excavated materials similar, says expert, Deccan Chronicle, Oct. 31, 2018).

NGOs in Tamil Nadu have direct access to excavated artefacts. P.J. Cherian runs an NGO named ‘PAMA’, and through its new project, ‘Rediscovering the ancient sites in Tamilakam’, he links Pattanam, Keezhadi and Kodumanal sites in Kerala and Tamil Nadu. He claims he “had an on-hand documentation of excavated materials from many archaeological sites under the custody of Tamil Nadu Archaeology Department” (Do ancient Tamilakam sites deserve rediscovery, The Times of India, Nov 30, 2018). Gaspar Raj’s NGO, Tamil Maiyam, which includes Catholic priests such as Lourdu Anandam and Vincent Chinnadurai, filed a PIL demanding that the Keezhadi artefacts should not be transferred to Karnataka for study. Such demands show that these NGOs have, or find ways to have direct access to excavated artefacts from these sites to manipulate them conveniently to determine the past.

NGOs operating out of Tamil Nadu received the maximum foreign funding of about Rs.547 crore in 2013-14, according to the Ministry of Home Affairs (T.N. NGOs received maximum foreign funds in 2013-14’, The Hindu, Nov., 26, 2014). Mathew Cherian, Chairperson of Voluntary Action Network India says southern states top in foreign funding due to presence of Christian organizations (Foreign funds pour in; 3,000 Ngo’s get over Rs. 22,000 cr., The Hindu, Aug. 3, 2016). NGOs in Tamil Nadu got significant percentage of funding, with maximum of 33% flowing in from USA (Rajnath Singh launches online tool to monitor foreign-funded NGOs, The Economic Times, Jan. 2, 2018).

The Madurai Bench of the Madras High Court permitted the ASI on November 24, 2016 to shift the finds at Keezhadi to its chemistry branch headquarters in Dehradun or any other laboratory in the country. The judges based their decision on ASI Director General Rakesh Tewari’s submission that “all the required examination of the excavated materials cannot be carried out” at the ASI’s chemistry laboratory in Chennai because it “is not equipped with the necessary and advanced facilities for proper examination and analysis” of the artefacts’ (More excavation only after report in Frontline, Jan., 20, 2017).

The delay in submitting reports to ASI on Keezhadi excavations by Amarnath Ramakrishna obstructed granting of excavation license and funds for third field season, a fact concealed by the excavator and NGOs. Asked in 2017 whether the ASI would give Amarnath Ramakrishna the license to excavate for the third field season, the Director General said: “The license for the third year will be given after the completion of the documentation of the excavation and the artefacts found during the first two years. Otherwise, the report never comes (More excavation only after report, Frontline, Jan. 20, 2017).

Later, ASI Director General Rakesh Tewari clarified that Keezhadi excavator Amarnath Ramakrishna had submitted only “brief” and “sketchy” reports about the first two years. Permission would be given to him after he wrote “a detailed report” (Keezhadi dig to continue, Frontline, March 17, 2017).

In April 2018, the Federation of Tamil Sangams in North America (FeTNA) invited Amarnath Ramakrishna to deliver a lecture on the Keezhadi excavations. The ASI denied him permission to participate as guest of honor at this event, possibly because FeTNA publicly supported the cause of ethnic Sri Lankan Tamils in the Sri Lankan civil war. Commenting on Tamil groups in Sri Lanka, Gaspar Raj unambiguously stated in an interview that, “We had a homeland and we have a homeland, and we will have the right for a homeland, since we have our own history, language, culture and way of living, and hence   have the right to self-determination” (Tamil Eelam not a lost cause: Fr. Jegath Gaspar, TamilNet, Nov. 3, 2009). FeTNA has honoured Gaspar Raj for Christianizing Tamil culture.

Along with Keezhadi excavations, zealous attempts to historicize Apostle Thomas gain momentum. Catholic priest P.J. Lawrence Raj informed bishops of the Catholic world: “It is believed that the apostle Thomas was murdered by a group of Hindus who did not fancy his proselytizing” and Gaspar Raj made efforts to re-establish St. Thomas in the mainstream narrative of Chennai’s Roman Catholic world (An apostle returns: Bringing St. Thomas back to Chennai, The Hindu, Oct. 27, 2018).

There are serious allegations that archaeological sites such as Keezhadi are controlled by church sponsored NGOs as advocates of Tamil culture, to manipulate cultural remains, embed missionaries such as Apostle Thomas, and  demand  a separate nationhood, including Tamil Nadu, parts of Kerala and Sri Lanka.

Recently the Archaeological Survey of India ( henceforth ASI) has given license to  P.J.Cherian’s ngo PAMA to excavate Pattanam and Mathilakam in Ernakulam and Thrishur districts of Kerala  as part of its Ancient Tamilakam project  (Times of India January 27, 2020) . Earlier, due to irregularities, found at the site,  the Central Advisory Panel of ASI  on  September 2015 asked KCHR to stop Pattanam excavations. In January 2016, the ASI   also ordered a probe into Pattanam excavations due to complaints .Professor RVG Menon is current Chairman of PAMA. Menon was earlier president of Kerala Sastra Sahithya Parishad  under the CPI(M).The strange question that arises at this juncture is whether Prof.Menon is ignorant of the strong allegations on dubious excavations at Pattanam and financial irregularities. Further, the strong links of Pattanam with Keezhadi, controlled by Father Gasper Raj and LTTE groups which have foreign funding from outside India, raises sharp questions on the global agenda behind the project.

(The author is State Vice President of Bharatheeya Vichara Kendram)